THIS EVENT HAS BEEN MOVED TO THE STORE.

Jeff will be talking cocktails and pop culture!

Purchase of book from Fountain not required, but strongly encouraged!!!

Jeff Cioletti’s tenure in liquid literacy has exposed him to some of the best
libations the world has to offer and given him access to the producers and
purveyors of such fine refreshments. He combines his love of drink with a
passion for travel and one usually involves the other. He is the editor in chief of
Craft Spirits Magazine, a publication of the American Craft Spirits Association.
Before that he served for fourteen years as an editor at Beverage World
magazine, including eight years as editor in chief. He’s also the author of the
books, “Drink Like a Geek,” “SakePedia,” “The Drinkable Globe,” “The Year of
Drinking Adventurously” and “Beer FAQ.”

Jeff is the founder of DrinkableGlobe.com and host of The Drinkable Globe
Podcast and has been a frequent contributor to a variety of publications including
Beverage Media, BevNet, Beverage Industry, The Takeout, SevenFifty Daily and
CraftBeer.com. Additionally, he’s certified as an International Kikisake-shi (sake
sommelier) by Sake Service Institute International and the winner of four North
American Guild of Beer Writers awards. 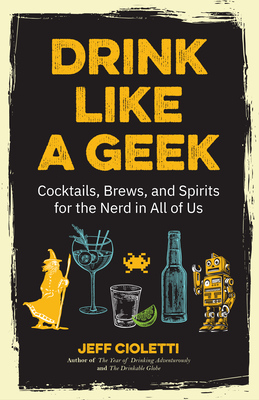 Drink Like a Geek marries Jeff's twin passions for alcohol and geek culture: in the early 2000s, Jeff directed two documentaries about Star Wars Episode I (the first in the build-up to its release, and the second after fans realized it sucked). There will be cocktail recipes throughout Drink Like a Geek -- interpretations of Miruvor of Middle Earth, Dornish Red and Arbor Gold of Westeros, etc. -- but the emphasis will be more on getting to know various subcultures than in genre recipe books like The Cocktail Guide to the Galaxy. That emphasis should be clear in the intro chapter included at the end of the proposal, which is about an experience Jeff had crossing enemy lines and drinking Romulan Ale at Dragon*Con in Atlanta.

To buy books only if you cannot make the event or see Jeff's other books, click here.

Drink Like a Geek: Cocktails, Brews, and Spirits for the Nerd in All of Us (Paperback)