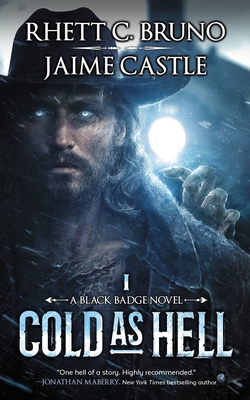 In the West, there are worse things to fear than bandits and outlaws.

Demons. Monsters. Witches. James Crowley's sacred duty as a Black Badge is to hunt them down and send them packing, banish them from the mortal realm for good.

Shot dead in a gunfight many years ago, now he's stuck in purgatory, serving the whims of the White Throne to avoid falling to Hell. Not quite undead, though not alive either, the best he can hope for is to work off his penance and fade away.

This time, the White Throne has sent him to investigate a strange bank robbery in Lonely Hill. An outlaw with the ability to conjure ice has frozen and shattered open the bank vault and is now on a spree, robbing the region for all it's worth.

In his quest to track down the ice-wielder and suss out which demon is behind granting a mortal such power, Crowley finds himself face-to-face with hellish beasts, shapeshifters, and, worse ... temptation. But the truth behind the attacks is worse than he ever imagined ...

The Witcher meets The Dresden Files in this weird Western series by the Audible number one bestselling duo behind Dead Acre.