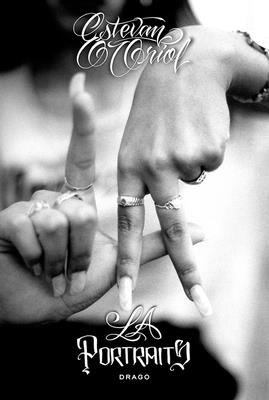 By Estevan Oriol
$60.00
Not available for purchase

In LA Portraits, the internationally celebrated photographer, Estevan Oriol, explores the vibrant gang culture pervading the City of Angels. The book follows its immensely popular predecessor, LA Woman in its ability to capture an authentic view of the people of Los Angeles. "They are not all monsters," says Oriol, "you got cool guys, crazy guys, assholes. Most people are cool that's why I hang out with them. It's more a brotherhood, a family. Got the barbecue, low riding, hanging out, school days, guns, drugs, a little bit of everything." The collection comprises over one hundred iconic images sourced from Oriol's fascinating and extensive archive that spans over 20 years. Every photograph is shot on film, presenting the viewer with a unique and insightful journey into the LA gangland. L'Oiel De La Photographie recognises this journey, calling Oriol's work "an unforgettable voyage to another time and place where your boys just becoming men visit tattoo parlors and begin to get their bodies inked. Of men with guns and sunglasses and masks, of makeshift memorials on the sidewalk where something terrible happened. Of colors, certain colors, and lots of plaid. Of bandanas, baseball caps, of low riders cruising up along, dudes posted up, uniform of the streets." -Miss Rosen.

Estevan Oriol is an internationally celebrated professional photographer, director and urban lifestyle entrepreneur. Beginning his career as a hip-hop club bouncer turned tour manager for popular Los Angeles-based rap groups Cypress Hill and House of Pain, Estevan's passion for photography developed while traveling the world. With an influential nudge and old camera from his father, renowned photographer Eriberto Oriol, Estevan began documenting life on the road and established a name for himself amid the emerging hip-hop scene. Nearly 20 years later, Oriol's extensive portfolio juxtaposes the glamorous and gritty planes of LA culture, featuring portraits of famous athletes, artists, celebrities and musicians as well as Latino, urban, gang, and tattoo counterculture lifestyles. He has photographed Al Pacino, Robert De Niro, Dennis Hopper, Marissa Miller, Kim Kardashian, Kanye West, Snoop Dogg, Floyd Mayweather, and Lance Armstrong amongst others. He has also produced shoots for internationally-acclaimed photographers such as Ellen von Unwerth for Sang Bleu and Luca Babini for GQ Italy. In addition to shooting campaigns for companies including Cadillac, Nike and Rockford Fosgate and directing new media projects for My Cadillac Stories, MetroPCS, MTV and Apple, Estevan has designed album covers and directed music videos for artists including Eminem, Cypress Hill, Blink 182, Snoop Dogg and Xzibit. His work has been showcased in select galleries and institutions--such as Smithsonian Center for Latino Initiatives, Mesa Contemporary Art Center, Petersen Automotive Museum, and The Museum of Contemporary Art, Los Angeles "Art in the Streets" exhibit--concluding with a best-selling book of his work: LA Woman, capturing the dangerous and alluring beauty of women shot in his uniquely provocative and raw style. His photography has been featured in Complex, FHM, Juxtapoz, GQ, Vibe, Rolling Stone and other publications, with appearances on popular television shows such as, HBO's Entourage and Last Call With Carson Daly.