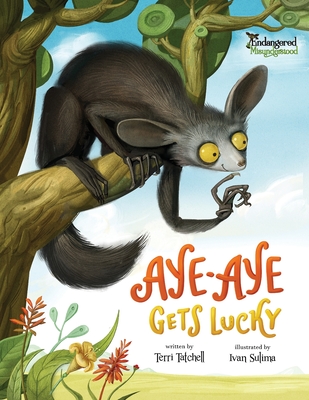 By Terri Tatchell, Ivan Sulima (Illustrator)
$10.99
On Our Shelves Now

Aye-Aye doesn't mean to be naughty. He can't help himself. Or can he?

Until one day, they decide enough is enough and ban him from the village Poor Aye-Aye is lonely and hungry and desperate to find a way to win back their hearts and clear his name. But how can he when he doesn't understand where he went wrong?

Luckily, a friendly flying fox swoops in to teach Aye-Aye a lesson and helps him to understand how his trickster ways made the people feel. Can Aye-Aye find a way to prove to the villagers that he's changed? Will they give him a second chance? Will you?

On the surface, "Aye-Aye Gets Lucky" is about a misunderstood lemur finding a way to win love, but look deeper, and it's a story about empathy, self-acceptance, community, and second chances.

Kids love the fact-filled spread at the end of the story where they can learn about the aye-aye and flying fox, ways to help endangered animals, and even how to draw them

Endangered & Misunderstood is an ongoing series of children's picture books that takes a different approach to the serious subject of lesser-known endangered animals, with an emphasis on laughter, adventure, and themes everyone can relate to.

Buy "Aye-Aye Gets Lucky" to help this endangered lemur turn his luck around. All proceeds go towards the protection and conservation of endangered lemurs, just like Aye-Aye.