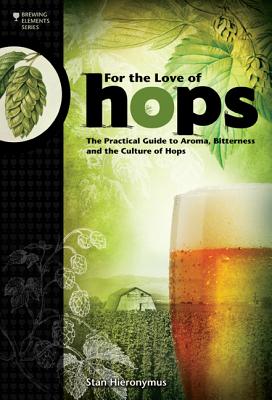 It is difficult to believe that at one time hops were very much the marginalized ingredient of modern beer, until the burgeoning craft beer movement in America reignited the industry's enthusiasm for hop-forward beer. The history of hops and their use in beer is long and shrouded in mystery to this day, but Stan Hieronymous has gamely teased apart the many threads as best anyone can, lending credence where due and scotching unfounded claims when appropriate. It is just one example of the deep research through history books, research articles, and first-hand interviews with present-day experts and growers that has enabled Stan to produce a wide-ranging, engaging account of this essential beer ingredient. While they have an exalted status with today's craft brewers, many may not be aware of the journey hops take to bring them, neatly baled or pressed into blocks and pellets, into the brewhouse. Stan paints a detailed and, at times, personal portrait of the life of hops, weaving technical information about hop growing and anatomy with insights from families who have been running their hop farms for generations. The author takes the reader on a tour of the main growing regions of central Europe, where the famous landrace varieties of Slovenia, the Czech Republic, and Germany originate, to England and thence to North America, and latterly, Australia and New Zealand. Growing hops and supplying the global brewing industry has always been a hard-nosed business, and Stan presents statistics on yields, acreage, wilt and other diseases, interspersed with words from the farmers themselves that illustrate the challenges and uncertainties hop growers face. Along the way, Stan gives details about some of the most well-known varieties--Saaz, Hallertau, Tettnang, Golding, Fuggle, Cluster, Cascade, Willamette, Citra, Amarillo, Nelson Sauvin, and many others--and their history of use in the Old World and New World. The section culminates in a catalog of 105 hop varieties in use today, with a brief description of character and vital statistics for each. Of course, the art and science of using hops in making beer is not forgotten. Once the hops have been harvested, processed, and delivered to the brewery, they can be used in myriad ways. The author moves from the toil of the hop gardens to that of the brewhouse, again presenting a blend of history and present-day interviews and research articles to explain alpha acids, beta acids, bitterness, harshness, smoothness, and the deterioration of bittering flavors over time. Perception is all important when discussing bitterness, and the author touches on genetics, evolution, the vagaries of individuals' perceptions of bitterness, and changing tastes, such as the "lupulin shift." The meaning of the international bitterness unit, or IBU, is not always properly understood and here Stan lays out a brief history of how the IBU came to be and an appreciation of the many variables affecting utilization in the boil and final bitterness in beer. Adding hops is not as simple as it sounds, and Stan's research illustrates that if you ask ten brewers about something you will get eleven opinions. Early additions, late additions, continuous hopping, first wort hopping, and hop bursting are all discussed with a healthy dose of pragmatic wisdom from brewers and a pinch of chemistry. There then follows an entire chapter devoted to the druidic art of dry hopping, following its commonplace usage in nineteenth-century England to the modern applications found in today's US craft brewing scene. The author uncovers hop plugs, hop coffins, and the "pendulum method," along with the famous hop rocket and hop torpedo used by some of America's leading craft breweries. Every brewer has their dry hopping method and, gratifyingly, many are happy to share with the author, making this chapter a great source for inspiration and ideas. Many of the brewers the author interviewed were also happy to share recipes. There are 16 recipes from breweries in America, Belgium, Czech Republic, Denmark, England, Germany, and New Zealand. These not only present delicious beers but give some insight into how professional brewers design their recipes to get the most out of their hops. As always, Stan imparts wisdom in an engaging and accessible fashion, making this an amazing compendium on "every brewer's favorite flower.

Stan Hieronymus is a professional journalist and amateur brewer who has made beer his beat since 1993. His travels have taken him to breweries in every state in the country. The editor at RealBeer.com, he's penned hundreds of articles for periodicals and publications and has co-authored four books with his wife, Daria Labinsky: Brewing Local (2016), For the Love of Hops: The Practical Guide to Aroma, Bitterness and the Culture of Hops (2012), Brewing with Wheat (2010) and Brew like a Monk (2005) for Brewers Publications and contributed to several other publications, including 1001 Beers You Must Taste Before You Die.