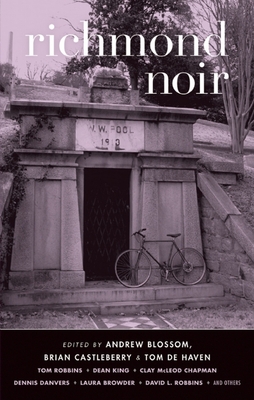 The River City emerges as a hot spot for unseemly noir. Brand-new stories by: Dean King, Laura Browder, Howard Owen, Yazmina Beverly, Tom De Haven, X.C. Atkins, Meagan J. Saunders, Anne Thomas Soffee, Clint McCown, Conrad Ashley Persons, Clay McLeod Chapman, Pir Rothenberg, David L. Robbins, Hermine Pinson, and Dennis Danvers. FROM THE INTRODUCTION TO RICHMOND NOIR: In The Air-Conditioned Nightmare, Henry Miller tosses off a hard-bitten assessment of the City on the James: 'I would rather die in Richmond somehow, ' he writes, 'though God knows Richmond has little enough to offer.' As editors, we like the dying part, and might point out that in its long history, Richmond, Virginia has offered up many of the disparate elements crucial to meaty noir. The city was born amid deception, conspiracy, and violence . . . These days, Richmond is a city of winter balls and garden parties on soft summer evenings, a city of private clubs where white-haired old gentlemen, with their martinis or mint juleps in hand, still genuflect in front of portraits of Robert E. Lee. It's also a city of brutal crime scenes and drug corners and okay-everybody-go-on-home-there's-nothing-more-to-see. It's a city of world-class ad agencies and law firms, a city of the FFV (First Families of Virginia) and a city of immigrants--from India, Vietnam, and Africa to Massachusetts, New York, and New Jersey. It's a city of finicky manners (you mustn't ever sneeze publicly in Richmond) and old-time neighborliness, and it's a city where you think twice about giving somebody the finger if they cut you off on the Powhite Parkway (that's pronounced Pow-hite, not Po-white, thank you very much) because you might get your head blown off by the shotgun on the rack . . .

Andrew Blossom is the founding editor of Makeout Creek. He lives in Richmond, Virginia.Brian Castleberry has worked as a cook, a dishwasher, a teacher, a carnie, a shoe salesman, a receptionist, and a waiter. He lives in Virginia with his wife and their two dogs.Tom De Haven is the author of seventeen books, including Freaks? Amour, Sunburn Lake, It's Superman! and the Derby Dugan trilogy of novels.