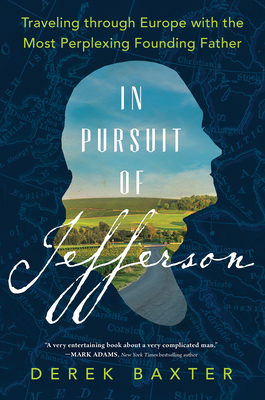 A debut that combines historical nonfiction with travel books, for fans of Bill Bryson and Tony Horwitz, In Pursuit of Jefferson is the story of an American on a journey through Europe, following the epic trail of Thomas Jefferson.

A controversial founding father. A man ready for a change. And a completely unique trip through Europe.

In 1784, Thomas Jefferson was a broken man. Reeling from the loss of his wife and stung from a political scandal during the Revolutionary war, he needed to remake himself. To do that, he traveled. Wandering through Europe, Jefferson saw and learned as much as he could, ultimately bringing his knowledge home to a young America. There, he would rise to power and shape a nation.

More than two hundred years later, Derek Baxter, a devotee of American history, stumbles on an obscure travel guide written by Jefferson—Hints for Americans Traveling Through Europe—as he's going through his own personal crisis. Who better to offer advice than a founding father himself? Using Hints as his roadmap, Baxter follows Jefferson through six countries and countless lessons. But what Baxter learns isn't always what Jefferson had in mind, and as he comes to understand Jefferson better, he doesn't always like what he finds.

In Pursuit of Jefferson is at once the story of a life-changing trip through Europe, an unflinching look at a founding father, and a moving personal journey. With rich historical detail, a sense of humor, and boundless heart, Baxter explores how we can be better moving forward only by first looking back.

"Baxter debuts with an entertaining and informative chronicle of his attempt to recreate Thomas Jefferson's travels in Europe.... Baxter manages to bridge the 18th and 21st centuries with skill. This historically informed travelogue delights." — Publishers Weekly

"Every schoolchild knows Thomas Jefferson wrote the Declaration of Independence, but I doubt even the most dedicated reader of travel literature knows he also published a compact guide explaining the architecture, people, food and (especially) wines of Old World Europe to the citizens of the brand-new United States. This retracing of the Founding Father's life-changing time abroad is a very entertaining book about a very complicated man." — Mark Adams, New York Times bestselling author

"This jaunty, inventive approach to an old question—who was Thomas Jefferson?—turns out to be a wise, readable, and altogether satisfying work." — Kirkus STARRED Review

"At a time when cultural battles over everything from monuments to school curricula often turn ugly, Baxter provides a hopeful model for an honest reckoning with history." — Christian Science Monitor

"Baxter debuts with an entertaining and informative chronicle of his attempt to recreate Thomas Jefferson's travels in Europe.... Baxter manages to bridge the 18th and 21st centuries with skill. This historically informed travelogue delights." — Publishers Weekly

"In Pursuit of Jefferson is an excellent historical travelogue focused on Thomas Jefferson's unique musings and wanderings across Europe. Derek Baxter is an unabashed fan of the Sage of Monticello and follows him on his journeys as he matures as a politician, naturalist, scientist, and observer of human nature. The glue that holds the book together is found in the timeless parallels of scenery and outlook that the author discovers along the way. Jefferson, though no Mark Twain, turns out to be the quintessential American abroad—a sometimes fumbling Founder infused with gusto, wit, and affection for most everyone and everything he meets." — Philip G. Smucker, author of Riding with George: Sportsmanship & Chivalry in the Making of America's First President

"Taking their cues from Jefferson's Hints to Travelers and following in his footsteps, Derek Baxter and his family gained a deeper and more enlightened understanding of a flawed founder's life and enduring legacies. This is travel writing at its best, an impressively researched and well-crafted chronicle of self-discovery and civic engagement." — Peter S. Onuf, Thomas Jefferson Foundation Professor of History, Emeritus, University of Virginia

"In Pursuit of Jefferson is an endlessly intriguing and completely original portrait of a complicated man and the places that formed him. Derek Baxter is the perfect guide, pairing a wry, eager sense of adventure with meticulous research, ever mindful of Jefferson's instruction to 'follow truth, wherever it may lead'—even when those insights reveal a troubling side of the founding father and his legacy." — Doug Mack, author of The Not-Quite States of America

"In his debut book, In Pursuit of Jefferson, Derek Baxter tells the bittersweet story of Thomas Jefferson, or should I say, Baxter's own reckoning with this most revered—and contradictory—figure from American history. In crisp language that is often conversational, Baxter weaves history with geography, food and wine, and science to tell what is ultimately a story of acceptance. It is only after following Jefferson's 'hints' through Europe—not to mention the Paris of North America—that Baxter comes to accept Jefferson for who he really was—a flawed human who might still offer some 'hints' on how best to move forward today. It confronts the uncomfortable but relevant issue of Jefferson's involvement with slavery plainly, and with heartfelt honesty. This is a fine work of historical travelogue that will appeal to anyone with an interest in history, geography, science, and self-discovery—an engaging read offering much food for thought." — Darrin Lunde, author of The Naturalist

"Baxter's humorous, warm voice is one readers will hope to hear more of in the future." — Booklist