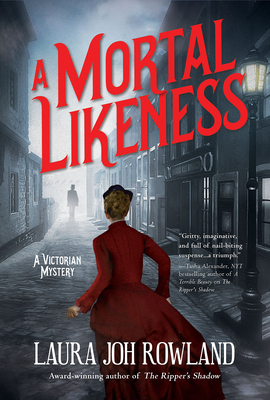 This is book number 2 in the A Victorian Mystery series.

Fresh off the Jack the Ripper case, Sarah Bain and her ragtag team of investigators search for the missing child of a wealthy banker—who may be more perpetrator than victim

A photographer in 1889 London, Miss Sarah Bain runs a private detective agency with her friends, Lord Hugh Staunton and former street urchin Mick O’Reilly. Their sole credential is that they solved the Jack the Ripper case, a secret they can never tell because they did it outside the boundaries of the law. Their new big case arises when a wealthy banker, Sir Gerald Mariner, posts a handsome reward for finding his missing infant. All of London joins in the search. But Sarah has an advantage—a photograph she took during a routine surveillance job, which unexpectedly reveals a clue about the kidnapping.

After Sir Gerald hires Sarah, Hugh, and Mick to find his son, they move into his opulent mansion and discover a photograph of baby Robin. It eerily resembles postmortem photographs taken of deceased children posed to look as if they’re alive. Was the kidnapping real, or a cover-up for a murder? Is the perpetrator a stranger, or someone inside the troubled Mariner family?

The case hits close to home for Sarah as it intertwines with her search for her father, who disappeared after he became the prime suspect in a murder twenty-three years ago. She finds herself on the wrong side of the law, which threatens her budding romance with Police Constable Barrett. But Sarah must uncover the truth about Robin’s kidnapping, and her own family, before her past catches up to her in A Mortal Likeness, the gripping follow-up to award-winning author Laura Joh Rowland’s The Ripper’s Shadow.

Laura Joh Rowland is the bestselling author of the samurai detective Sano Ichiro mystery series set in 17th century Japan, as well as a historical suspense series starring Charlotte Bronte. Her work has been published in 21 countries; nominated for the Anthony Award, the Hammett Prize, and the Barnes & Noble Discover Great New Writers Award; won RT Magazine’s Reader’s Choice Award; and been included in the Wall Street Journal’s list of the five best historical mystery novels. Laura holds a Bachelor of Science and a Master of Public Health degree from the University of Michigan. She is a former aerospace scientist, a painter, and a cartoonist. She lives in New York City with her husband Marty. This is her second Victorian mystery.

Praise for A Mortal Likeness:
“A winning team of outsider heroes and a colorful first-person narrative.”
—Kirkus Reviews

"Attention to atmospheric detail, original characterizations, and escalating conflict...This is a fresh, modern take on the streets that produced a murderer ’From Hell.’"
—Strand Magazine

"[Rowland’s] wildly diverse cast...brings a special focus on the forgotten and ignored of Victorian society, and provides a fresh, and refreshing, point of view to the otherwise morbid proceedings."
—Mystery Scene Magazine

"Easily one of the best things I’ve read all year...This is a vivid, enjoyable novel with a likable cast of characters and plenty of intrigue and suspense...I’m keen to see what Sarah Bain gets up to next."
—Ripperologist Magazine

“Laura Joh Rowland reinvents the story of Jack the Ripper in a wholly unexpected way. Gritty, imaginative, and full of nail-biting suspense, The Ripper’s Shadow is a triumph.”

"Please let this be the start of a series. I went into The Ripper’s Shadow wondering if I could care about another Jack the Ripper novel, and emerged at the end of it thrilled, off-balance, and astonished at how Laura Joh Rowland was able to bring Victorian England into such vivid life, and a story we all know into new relief. This is a fantastic read."