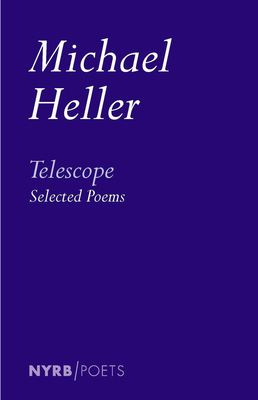 By Michael Heller
$18.00
Not available for purchase

An original selection of work by one of America's greatest living poets.


For more than fifty years, Michael Heller has been building one of the most impressive bodies of work in contemporary American poetry. His poems, shaped by Jewish and Buddhist thought and simultaneously lyrical and philosophical, engage the political and the natural world in an ongoing consideration of the responsibility and imaginative freedom of the poet. Profoundly reflective and deeply sensual, Heller is simply one of the best poets writing today.

This new selection of his work, the first in many years, provides a perfect vantage from which to contemplate his achievement.

Michael Heller has published more than twenty-five volumes of poetry, essays, and memoir. His recent works include the poetry collection This Constellation Is a Name: Collected Poems 1965–2010, Dianoia, and Beckmann Variations and Other Poems, a work in prose and poetry. He is the recipient of numerous prizes, including awards from the Poetry Society of America, the National Endowment for the Humanities, and the Fund for Poetry. He lives in New York City.

"As Wallace Stevens explored the shifting relationship between imagination and reality, so Heller explores the shifting and often uneasy relationship between language and that which it purports to name. Other poets frequently touch upon this problem, but over fifty years Heller has developed a body of work that moves from groping toward the ways in which language helps distinguish self from other to a more sophisticated grasp of how the world is and isn’t text." —William Doreski, The Harvard Review

“In a poetic generation that has frequently settled for small answers, Heller’s work insists upon the largest questions.” —Rain Taxi

“Over the past half century, Michael Heller has quietly but emphatically established himself as one of the most masterful poets of a post-Objectivist tradition—indeed, as one of the most thoughtful, lyrical, and philosophically profound of contemporary American poets.” —Mark Scroggins

“To conceive otherwise,’ says Michael Heller, is the poet’s essential task. No matter if the poem is brief or extended, the line long or short, the setting Manhattan or the Colorado Rockies, a lost Bialystok or an imagined Tibet—what arises from the page is an action of mind, an asking, questing trajectory, tracked with uncanny surety by movement of the poetic line. This is no language-locked adventure, but an impassioned, ethical listening to the mind–and the world–at work in words.” –Susan Tichy

“Tone perfect poems—the tone, the scale, note by note, interval by interval—attack on the ‘gods of ennui and loneliness.’” —George Oppen

“What is sure to strike the reader here is the beauty of the writing. . . . Heller is clearly a poet of considerable range and learning.  This volume presents a writer who has charted a clear-eyed path through the poetics of his own time. There is a lot to be learned from it, particularly, perhaps, about what it means to live through one’s writing and what that kind of living inevitably entails.” —Ian Pope, The Manchester Review