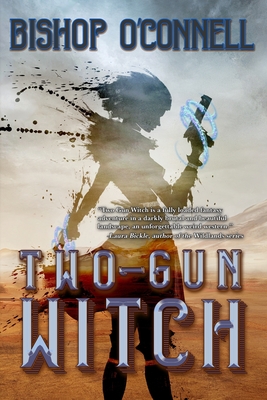 On Our Shelves Now
(This book cannot be returned.)

"Two Gun Witch is a fully loaded fantasy adventure in a darkly brutal and beautiful landscape, an unforgettable weird western."-Laura Bickle, author of the Wildlands series She's got two guns loaded with magic.Will they be enough? Talen is a Stalker, a bounty hunter hired by the Marshal Service to hunt down humans stained by dark magic. She's also a two-gun witch, one of the few elven women who can wield two magical revolvers, spell irons, at once. For three years she's lived for the next bounty, and a whisper of vengeance for the destruction of her people.That changes when she takes the warrant on Margaret Jameson, a new kind of stained, one immune to the usual tools of collection. Upon finding her quarry, Talen realizes Margaret isn't stained at all, but someone worked very hard to make her appear so.The search for an answer carries the two unlikely partners from the wilds of the Great Plains to the expansive cities of post-Civil War America. There, they learn the truth is much darker than they imagined, and it could mean the death of millions, or even reshape the world itself.
"Two Gun Witch mashes up alt history, weird west, and steampunk for a fun romp across 19th-century America. I mean, a gunfighter elf Dwarves Dark magic This book is a blast."- Beth Cato, author of Breath of Earth