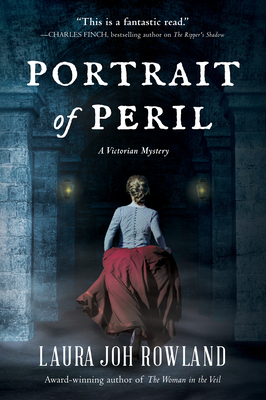 This is book number 5 in the A Victorian Mystery series.

For fans of C. S. Harris comes Laura Joh Rowland's fifth Victorian mystery where Sarah must confront her own ghosts--and face her most elusive and deadly adversary yet.

Victorian London is a city gripped by belief in the supernatural--but a grisly murder becomes a matter of flesh and blood for intrepid photographer Sarah Bain.

London, October 1890. Crime scene photographer Sarah Bain is overjoyed to marry her beloved Detective Sergeant Barrett--but the wedding takes a sinister turn when the body of a stabbing victim is discovered in the crypt of the church. Not every newlywed couple begins their marriage with a murder investigation, but Sarah and Barrett, along with their friends Lord Hugh Staunton and Mick O'Reilly, take the case.

The dead man is Charles Firth, whose profession is "spirit photography"-- photographing the ghosts of the deceased. When Sarah develops the photographs he took in the church, she discovers one with a pale, blurred figure attacking the victim. The city's spiritualist community believes the church is haunted and the figure is a ghost. But Sarah is a skeptic, and she and her friends soon learn that the victim had plenty of enemies in the human world--including a scientist who studies supernatural phenomena, his psychic daughter, and an heiress on a campaign to debunk spiritualism and expose fraudulent mediums.

In the tunnels beneath a demolished jail, a ghost-hunting expedition ends with a new murder, and new suspects. While Sarah searches for the truth about both crimes, she travels a dark, twisted path into her own family's sordid history. Her long lost father is the prime suspect in a cold-case murder, and her reunion with him proves that even the most determined skeptic can be haunted by ghosts from the past.

Laura Joh Rowland is the award-winning author of the samurai detective Sano Ichiro mystery series set in 17th century Japan, as well as a historical suspense series starring Charlotte Bronte. Her work has been published in 21 countries; nominated for the Anthony Award, the Hammett Prize, and the Barnes & Noble Discover Great New Writers Award; won RT Magazine's Reader's Choice Award; and been included in the Wall Street Journal's list of the five best historical mystery novels. Laura holds a Bachelor of Science and a Master of Public Health degree from the University of Michigan. She is a former aerospace scientist, a painter, and a cartoonist. She lives in New York City with her husband Marty. This is her fourth Victorian mystery.

Praise for Portrait of Peril:
“Rowland’s Victorian London is fascinating and her team of irregulars unmatched."
—Kirkus Reviews

“[Rowland] has proved herself to be a formidable figure in the historical mystery genre, with an eye for period detail and a deft hand at characterization.”
—Booklist

“Rowland is good at designing strong tension and conflict scenes that keep
the pages turning.”
—New York Journal of Books

"A satisfying resolution...Recommend[ed] to anyone who likes historical mysteries."
—Seattle Book Review

“It starts off fast and never lets up...One of my favorite series of books.”
—Red Carpet Crash

"One surprising turn after another...The settings and character are vividly described, the dialogue is lifelike, and Sarah's empathy, tenacity, and grit make her an engaging heroine."
—Mystery Scene

Praise for The Woman in the Veil:
"Strong in character and plot, Rowland's fourth Victorian mystery consistently appeals."
—Kirkus Reviews

"[The Woman in the Veil] should build interest in Rowland's richly atmospheric Victorian mysteries."
—Booklist

“Impressively elegant and well crafted...A compelling and compulsive page turner of a read from cover to cover.”
—Midwest Book Review

“An appealing trio of crime solvers...The author’s knowledge and understanding of the Victorian age are flawless as she brings this mystery to an exciting conclusion.”
—Historical Novels Review

“The author is masterful at weaving many moving parts of this story together...I would highly recommend it to anyone who loves historical mystery thrillers.”
—Seattle Book Review

“Rowland definitely picks up the pace and crispness...A delightful and suspenseful page-turner that is both engaging and keeps readers guessing.”
—Historical Novels Review

"The story holds water and reads well from beginning to end.”
—New York Journal of Books

"A superbly crafted Victorian mystery by an author who is quite apparently a master of the genre...A riveting read from cover to cover."
—Midwest Book Review