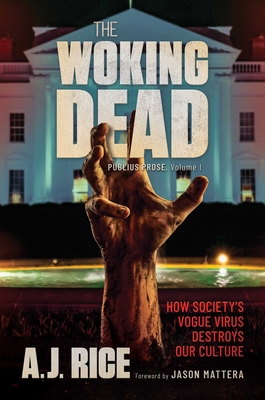 The Woking Dead are everywhere. An army of undead ghouls turning millions into mindless, ravenous devourers of all things good and American.

Donald J. Trump was the vaccine America needed. He fought for America against the Deep State and the woke maniacs relentlessly destroying everything Americans love. They’re attacking George Washington. They’re attacking Dave Chappelle and Abraham Lincoln. They have taken over the New York Times and the NBA. Trump understood this, and he stood, seemingly alone at times, against the cancel culture hordes clawing to take down the United States from within.

Rice understood the importance of Trump and why America needed him. This explains why many of Trump’s closest advisors have sought out A.J. Rice’s media advice and publicity help. If he wasn’t helping you today, chances are he will tomorrow.

Rice has fought behind the scenes for years, in ways you saw and heard but never understood—until now. A creative mind behind some of the nation’s most important talk radio stars and the strategist behind the America First books you love to read. Like it or not, his content has been around you in some form for decades.

He was in your favorite publications and behind some of America’s most courageous culture warriors and institutions, crafting strategy and winning the battles you care about. You’ve seen A.J. Rice's work for years...you just never knew it.

In The Woking Dead, Rice reveals it all. This bracing, hilarious, biting, hard-hitting collection takes you deep into the fight to make America great again. Rice, a contributor to many popular publications and the CEO of Publius PR in Washington, DC, seeks to save America from Joe Biden and his woke zombie battalions in government, entertainment, academia, sports, and media. The Woking Dead will wake you up to what’s happening in your culture and help you gird your loins for the crazy years ahead.

“At last, my former radio executive producer, A.J. Rice, unleashes a must-read takedown of the cultural and political forces rampaging across America—and a sharp, incisive primer on how we can defeat them.” — Laura Ingraham, host of Fox News Channel’s The Ingraham Angle, and #1 New York Times bestselling author

“Having worked with A.J. Rice on many of my own projects, I know him to be astute, no-nonsense, and on point. Stop what you’re doing right now and pick up a copy of The Woking Dead!” — Judge Jeanine Pirro, co-host of Fox News Channel’s The Five, and #1 New York Times bestselling author

“A.J. Rice and I go way back! He has been a coal miner in the conservative trenches for patriotic projects for years. Including my own. It’s about time America found out what is on his mind.” — Pete Hegseth, co-host of FNC’s Fox and Friends Weekend, and New York Times bestselling author

“Like all American weaknesses, China loves Wokeism. My friend and publicist A.J. Rice ties culture and politics together as cleverly and urgently as anyone in the business. This book is useful, entertaining, and informative.” —Brig. Gen. Robert S. Spalding III (USAF-Ret.), former senior director for strategic planning for the White House National Security Council, and author of Stealth War: How China Took Over While America’s Elite Slept

“The Woking Dead are among us and have been for decades—diligently setting the stage for the systematic destruction of our Western way of life. Conservative insider A.J. Rice exposes the players, their agenda, and how they've been using academia to build an army of anti-American, group-think zombies, in this must-read book.”—Jesse Kelly, host of I’m Right on TheFirstTV & The Jesse Kelly Show on Premiere Networks

“The Woking Dead is a must read for anyone who wants a look inside the left’s plot to steal our children and our minds. Many years ago, I coined the phrase 'blind liberal zombies,' this book takes that one phrase to a whole new level.  The MAGA PR King A.J. Rice lets the truth bombs fly!” — Grant Stinchfield, host of Newsmax TV’s Stinchfield

“In The Woking Dead, my former Executive Producer A.J. Rice nails the cultural madness and dark manipulations of the radical Left as few others do or can: with smarts, humor, and refreshing common sense.  A must-read for those who care about the precarious state of our beloved America today.”  — Monica Crowley, former assistant secretary of the Treasury and New York Times bestselling author

“I have worked with A.J. Rice on several book projects, and he is hands-down one of the sharpest behind-the-scenes media players conservatism has. With his new book, the PR wizard steps into the spotlight this time to deliver the smackdown on those who definitely deserve it.” — Steve Deace, host of The Steve Deace Show on BlazeTV, and bestselling author

"The Woking Dead is the smartest take from one of the smartest minds in public relations, and his exciting new book outlines where we are as a country and how we can survive the bumbling Biden regime.” — Stephanie Hamill, host of In Focus on One America News Network

“The culture war is on, and the other side is playing for keeps. Stale and clueless politicians are ill-equipped to fight this war. In The Woking Dead, my friend A.J. Rice proves himself to be the answer to the left’s attack on America’s culture.” — Chris Salcedo, host of Newsmax TV’s The Chris Salcedo Show