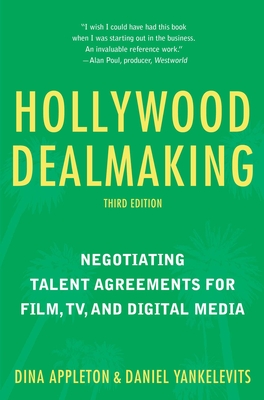 By Dina Appleton, Daniel Yankelevits
$24.99
Not available for purchase

"I wish I could have had this book when I was starting out in the business. An invaluable reference work." —Alan Poul, producer, Westworld

The legal resources of studios and networks are legendary, often intimidating independent producers, writers, actors, directors, agents, and others as they try to navigate through the maze of legal details. This invaluable reference presents the interests of talent as well as the point of view of creative executives, producers, entertainment attorneys, agents and managers, and major guilds—making clear the role that each plays in the deal-making process.

Readers will find expert insights to talent and production deals for television, feature film, video, and the Internet, as well as an in-depth overview of net profits and other forms of contingent compensation. Hollywood Dealmaking, Third Edition, also addresses digital and new platforms, changes resulting from new union agreements, and the evolution in feature film back-end (profit participation) deals. In addition, this comprehensive guide includes:

Peppered with facts on the deals of superstar players and with summaries in each section to clarify complex legal issues, Hollywood Dealmaking, Third Edition, is an essential resource for industry novices and veterans alike who want to sharpen their negotiation skills and finalize the deals they have been seeking.

Dina Appleton is currently Senior Vice President of Business and Legal Affairs at Entertainment One Television. Prior to her current position, she was special counsel in the Entertainment and Media Group at Sheppard Mullin Richter and Hampton and, prior to that, the head of business and legal affairs at a full-service talent and literary agency, both in Los Angeles, California. She resides in Toronto, Ontario.

Daniel Yankelevits is Senior Vice President of Legal Affairs at Sony Pictures Entertainment. He serves on the planning committee of the USC Institute of Entertainment Law and Business and teaches a course at the USC Gould School of Law entitled "Entertainment Law & Industry." Daniel is a graduate of Harvard Law School and resides in Los Angeles, California.

“I wish I could have had this book when I was starting out in the business. An invaluable reference work.” —Alan Poul, producer, Westworld

“Hollywood Dealmaking is a clear, concise, and comprehensive look at how deals are made in our business. Because of this book, I have become more informed about what questions to ask and what to expect or demand in my own deals.” —Larry Trilling, television writer and executive producer, Goliath, Parenthood, and Alias