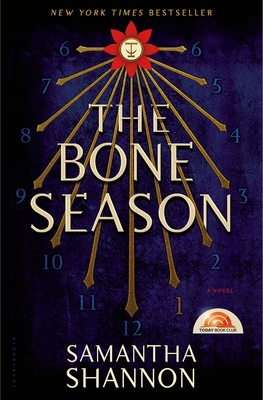 By Samantha Shannon
Email or call for price.
Out of Print

This is book number 1 in the The Bone Season series.

“Samantha Shannon has created a world that will set your imagination on fire and lure you in so absolutely you will forget your surroundings. You will also be elated to learn this is the first in a 7-book series. Fictional London in the year 2059 is the world of Paige Mahoney, a dreamwalker. Scion is the ruling government. They absolutely reject any type of clairvoyant abilities. If they find you have those skills, you disappear. Paige discovers this is true, but the disappearance is not what she has been led to believe. Mind-bendingly intense, rife with fascinating characters and an all-encompassing plot, The Bone Season will take you on one wild ride. -- Lynn Riggs Books & Company”
— Lynn Riggs, Books & Company, Oconomowoc, WI

The New York Times bestselling first novel in the Bone Season series, an epic fantasy about a young woman fighting to use her powers and stay alive in an England entirely different from our own.

In 2059, Scion has taken over most of the world's cities, promising safety for all the citizens it deems worthy and wiping out clairvoyants wherever it can find them.

Paige Mahoney, though, is a clairvoyant--and a criminal just for existing. Paige is determined to fight Scion's power, and as part of the Seven Seals, Paige has found a use for her powers: she scouts for information by breaking into others' minds as they dream.

But when Paige is captured and arrested, she encounters a power more sinister even than Scion. The voyant prison is a separate city, controlled by a powerful, otherworldly race. These creatures, the Rephaim, value the voyants highly—as soldiers in their army.

Paige is assigned to a Rephaite keeper, Warden, who will be in charge of her care and training. He is her master. Her natural enemy. But if she wants to regain her freedom, Paige will have to learn something of his mind and his own mysterious motives.

The Bone Season introduces a compelling heroine—a young woman learning to harness her powers in a world where everything has been taken from her. It also introduces an extraordinary young writer, with huge ambition and a teeming imagination. Samantha Shannon has created a bold new reality in this riveting debut.

“[The Bone Season] invokes both the political tyranny of George Orwell and the bucolic mythmaking of J.R.R. Tolkien.” —USA Today

“This book is definitely your new crack, full of juicy worldbuilding and heroic weirdness.” —Io9.COM

“Intelligent, inventive, dark, and engrossing enough to keep me up late to finish...There's a distinct Margaret Atwood wash to Shannon's dystopian universe, and echoes of Anthony Burgess's Clockwork Orange in the colorful lingo.” —NPR.org

“A dark and exquisitely rendered fantasy unlike anything out there. The Bone Season is a must-read.” —Kami Garcia, coauthor of the Beautiful Creatures series

“[A] dazzingly brainy, witty, and bewitching tale of outrageous courage, heroic compassion, transcendent love, and the quest for freedom...the first in a thoughtful fantasy series by a brilliant young writer.” —Booklist (starred review)