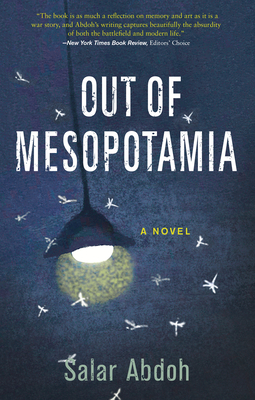 Informed by firsthand experience on the battlefronts of Iraq and Syria, Abdoh captures the horror, confusion, and absurdity of combat from a seldom-glimpsed perspective that expands our understanding of the war novel.

Abdoh's powerful novel follows an Iranian war reporter who is torn between his wearying job on the front lines and a civilian existence that he finds increasingly alienating. The book is as much a reflection on memory and art as it is a war story, and Abdoh's writing captures beautifully the absurdity of both the battlefield and modern life.
--New York Times Book Review, Editors' Choice

"One of a handful of great modern war novels...These wars will not end until we look at what we are doing and what we have done. Abdoh's novel lifts the veil on the murderous insanity."
--Pulitzer Prize-winning journalist Chris Hedges, for ScheerPost

As much a meditation on time and memory as it is a book about war...Abdoh skillfully captures combat's intrinsic absurdity...For many Americans, the conflicts in Syria and Iraq have become abstractions, separated from our lives by geographic as well as psychic boundaries. Abdoh collapses these boundaries, presenting a disjointed reality in which war and everyday life are inextricably entwined... The novel shines] a brilliant, feverish light on the nature of not only modern war but all war, and even of life itself.
--New York Times Book Review

A masterful, stylish novel told from the perspective of a disaffected Iranian writer who is drawn to the militias fighting in Syria and Iraq. Abdoh beautifully illustrates the paradoxes of war in the field and on the home front, alternating moments of brutality and comradeship and showing war's pointless heroisms, its random accidents, its absurdities, and its ongoing human costs. This is at once a probing look at the disaster in Syria and Iraq, and an affectionate yet gimlet-eyed view of masculinity, art, and cultural politics.
--The Millions, One of the Most-Anticipated Books of 2020

Abdoh explores the lives behind the war-torn headlines in a way that captures the full humanity of the participants. Channeling a bit of Tim O'Brien and a good deal of Joseph Heller, he has written the best novel to date on the Middle East's ceaseless wars.
--Library Journal, STARRED review

Saleh, the narrator of Out of Mesopotamia, is a middle-aged Iranian journalist who moonlights as a writer for one of Iran's most popular TV shows but cannot keep himself away from the front lines in neighboring Iraq and Syria. There, the fight against the Islamic State is a proxy war, an existential battle, a declaration of faith, and, for some, a passing weekend affair.

After weeks spent dodging RPGs, witnessing acts of savagery and stupidity, Saleh returns to civilian life in Tehran but finds it to be an unbearably dislocating experience. Pursued by his official handler from state security, opportunistic colleagues, and the woman who broke his heart, Saleh has reason to again flee from everyday life. Surrounded by men whose willingness to achieve martyrdom both fascinates and appalls him, Saleh struggles to make sense of himself and the turmoil in his midst.

An unprecedented glimpse into endless war from a Middle Eastern perspective, Out of Mesopotamia follows in the tradition of the Western canon of martial writers--from Hemingway and Orwell to Tim O'Brien and Philip Caputo--but then subverts and expands upon the genre before completely blowing it apart. Drawing from his firsthand experience of being embedded with Shia militias on the ground in Iraq and Syria, Abdoh gives agency to the voiceless while offering a meditation on war that is moving, humane, darkly funny, and resonantly true.

Salar Abdoh was born in Iran and splits his time between Tehran and New York City. He is the author of the novels Tehran at Twilight, The Poet Game, and Opium; and he is the editor of Tehran Noir. He teaches in the MFA program at the City College of New York