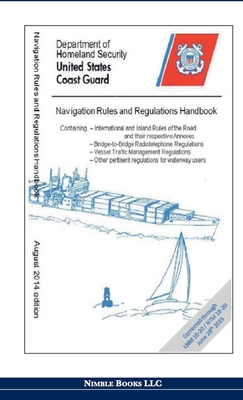 Most recently revised April 2020. Although now superseded by the Amalgamated International and U.S. Inland Navigation Rules ISBN 978-1608881666, Nimble Books, October 2020] this familiar volume is presented here in a convenient and durable hardcover format with full-color interior. Note: this hardcover edition from Nimble Books, ISBN 978-1-60888-188-8, is full-color, lights and all. Other editions may not be.

The International Rules in this book were formalized in the Convention on the International Regulations for Preventing Collisions at Sea, 1972, and became effective on July 15, 1977. The Rules (commonly called 72 COLREGS) are part of the Convention, and vessels flying the flags of states ratifying the treaty are bound to the Rules. The United States has ratified this treaty and all United States flag vessels must adhere to these Rules where applicable. President Gerald R. Ford proclaimed 72 COLREGS and the Congress adopted them as the International Navigational Rules Act of 1977.