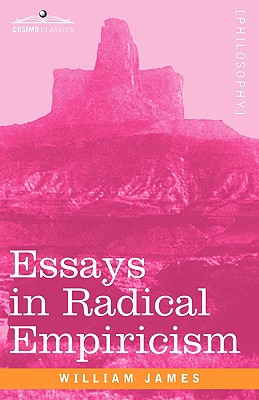 'Pure experience' is the name which I gave to the immediate flux of life which furnishes the material to our later reflection with its conceptual categories. Only new-born babies, or men in semi-coma from sleep, drugs, illnesses, or blows, may be assumed to have an experience pure in the literal sense of a that which is not yet any definite what, tho' ready to be all sorts of whats; full both of oneness and of manyness, but in respects that don't appear; changing throughout; yet so confusedly that its phases interpenetrate and no points, either of distinction or of identity, can be caught. --from Chapter III: "The Thing and Its Relations" What is the difference--if any--between consciousness and experience? What is the relationship between the knower and the known? Why do common sense and philosophy always seem to be at odds? American psychologist and philosopher WILLIAM JAMES (1842-1910), brother of novelist Henry James, was a groundbreaking researcher at Harvard University, author of such works as Principles of Psychology (1890) and The Varieties of Religious Experience: A Study in Human Nature (1902), and one of the most influential academics of the late 19th and early 20th centuries. Here, in a series of essays first published in book form in 1912, James explores these questions as he discusses: - does consciousness exist? - radical empiricism - conjunctive relations - how two minds can know one thing - the place of affectional facts in a world of pure experience - the experience of activity - the essence of humanism - humanism and truth - absolutism and empiricism - and more.