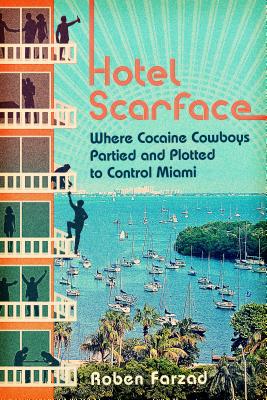 By Roben Farzad
Email or call for price.
Hard to Find

The wild, true story of the Mutiny, the hotel and club that embodied the decadence of Miami’s cocaine cowboys heyday—and an inspiration for the blockbuster film, Scarface...

Amid the boatloads of powder and cash reigned the new kings of Miami: three waves of Cuban immigrants vying to dominate the trafficking of one of the most lucrative commodities ever known to man. But as the kilos—and bodies—began to pile up, the Mutiny became target number one for law enforcement.

Based on exclusive interviews and never-before-seen documents, Hotel Scarface is a portrait of a city high on excess and greed, an extraordinary work of investigative journalism offering an unprecedented view of the rise and fall of cocaine—and the Mutiny—in Miami.

Roben Farzad hosts the weekly program Full Disclosure on NPR One and is a special correspondent on PBS NewsHour. He was previously a senior writer for Bloomberg Businessweek, where he covered Wall Street, international finance, and Latin America. Farzad is a graduate of Princeton University and Harvard Business School.