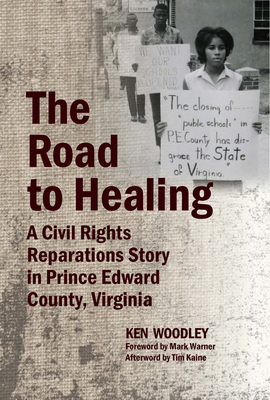 Prince Edward County, Virginia closed its public school system in 1959 in "massive resistance" to the U.S. Supreme Court's historic Brown v. Board decision of 1954. The editorial pages of the local family-owned newspaper, The Farmville Herald, led the fight to lock classrooms rather than integrate them. The school system remained closed until the fall of 1964, when the County was forced by federal courts to comply with the school integration ordered by Brown. The vast majority of white children had continued their education in a private, whites-only academy. But more than 2,000 black students were left without a formal education by the five-year closure. Their lives were forever changed. A Civil Rights Reparations Story: The Road to Healing in Prince Edward County, Virginia, by Ken Woodley, is his first-person account of the steps taken in recent years to redress the wound. The book's centerpiece is the 18-month fight to create what legendary civil rights activist Julian Bond told the author would become the first Civil Rights-era reparation in United States history; it was led by Woodley, then editor of The Farmville Herald, still owned by the original family. If the 2003-04 struggle to win passage of a state-funded scholarship program for the casualties of massive resistance had been a roller coaster, it wouldn't have passed the safety inspection for reasons of too many unsafe political twists and turns. But it did. The narrative unfolds in Virginia, but it is a deeply American story. Prince Edward County's ongoing journey of racial reconciliation blazes a hopeful and redemptive trail through difficult human terrain, but the signs are clear enough for a divided nation to follow. The history is as important for its insights about the past as it it about what it has to share about a way into our future.