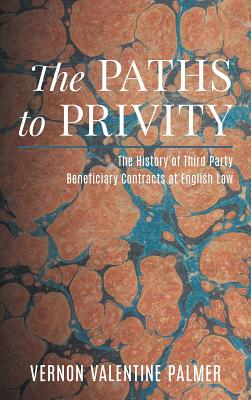 xii], 250 pp. Originally published: San Francisco: Austin & Winfield, 1992. Palmer's fascinating study analyzes the ingrained tendency to prevent third party beneficiary actions through a historical account of privity of contract. Chapter I discusses the origins and historical questions surrounding the issue of privity. Chapter II covers the triumph of consideration in the formative period, 1500-1680. Chapter III outlines the expansion in the chancery phase, 1680-1800, and Chapter IV deals with the rise of the parties-only principle at law and equity during the 1800s. VERNON VALENTINE PALMER is the Thomas Pickles Professor of Law and Co-Director of the Eason Weinmann Center for Comparative Law at Tulane University. He is the author of more than forty books and articles, including Through the Codes Darkly: Slave Law and Civil Law in Louisiana (2012), Mixed Jurisdictions Worldwide: The Third Legal Family (2nd ed., 2012), Mixed Jurisdictions Compared: The Private Law of Louisiana and Scotland (co-edited with Elspeth Reid) (2009), The Louisiana Civilian Experience: Critiques of Codification in a Mixed Jurisdiction (2005), Strict Liability in Europe (co-edited with Franz Werro) (2004), Pure Economic Loss in Europe (co-edited with Mauro Bussani) (2003) and Louisiana: Microcosm of a Mixed Jurisdiction (1999).