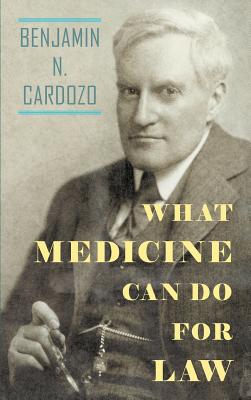 Benjamin Cardozo's Anniversary Discourse address to the New York Academy of Medicine, November 1, 1928, delivered when he was Chief Justice of the Court of Appeals, State of New York. Originally published: New York: Harper & Brothers, 1930. 52 pp. "This noteworthy address, with its appreciation of the scientific problems involved, its courage and social vision, will go down in history as one of the most valuable contributions in our time to medico-legal jurisprudence."--Bernard Lloyd Shientag, Moulders of Legal Thought 39 BENJAMIN N. CARDOZO 1870-1938] was an associate justice of the Supreme Court. One of the most influential American jurists of the twentieth century, his books include The Nature of the Judicial Process (1921) and The Paradoxes of Legal Science (1928).