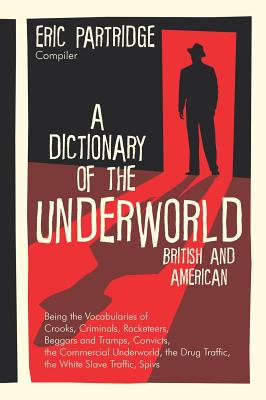 Originally published: New York: The Macmillan Company, 1950. xv, 804 pp. Reprint of the second edition. Thoroughly engrossing, A Dictionary of the Underworld offers definitions for such obscure terms and phrases as "witch-hazel man" (heroin addict), "eason" (to tell) and "budge a beak" (run away). "Once in about every generation a book is published which dominates its field. Such a book is Partridge's Dictionary of the Underworld, which is not only the first extensive work on the underworld to appear in the twentieth century, but also the largest in the English language. (...) It is truly a monumental work, so monumental that scholars may well be disturbed by its aura of substantiality, for it will undoubtedly be cited and quoted or years to come." --David W. Maurer, American Speech, Vol. 26, No. 1 (February 1951), 38. One of the great lexicographers of the twentieth century, ERIC PARTRIDGE 1894-1979] had a keen interest in slang and unconventional English. He wrote over forty books on the English language and compiled the Dictionary of Slang and Unconventional English, Shakespeare's Bawdy and A Dictionary of Catch Phrases. He also wrote novels under the pseudonym Corrie Denison.