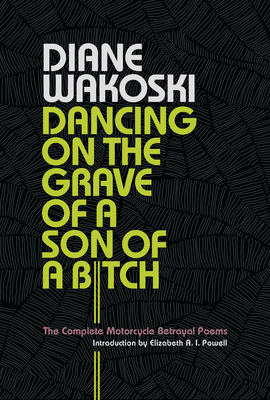 The liberating power of anger has rarely felt so good and healing as in this complete collection of a landmark in feminist poetry.

"She digs her teeth into the slaveries of woman, she cries them aloud with such fulminating energy that the chains begin to melt of themselves. Reaching into the hive of her angers, she plucks out images of fear and delight that are transparent yet loaded with the darknesses of life. Diane Wakoski is an important and moving poet."--The New York Times In 1971, Diane Wakoski published The Motorcycle Betrayal Poems to tremendous acclaim. In the decades that followed, she wrote additional "betrayal" poems, which are now collected here in one volume for the first time. Relevant, moving--at times shocking--it is Wakoski's honesty and bravery as an artist that continues to astonish, delight, inspire, and liberate readers. Wakoski responds to betrayal in a variety of ways including fantasies such as drilling bullet holes into the bodies of unfaithful lovers. But even her anger can be winking, as in the book's sly dedication to "all those men who betrayed me at one time or another, in hopes they will fall off their motorcycles and break their necks." There is joy here because it is self-knowledge that the writer seeks, as in the collection's title poem: So some white wolves and I
will sing on your grave, old man and dance for the joy of your
death. "Is this an angry statement?"
"No, it is a statement of joy."
"Will the sun shine again?"
"Yes,
yes,
yes,"
because I'm going to dance dance
dance Diane Wakoski's art as a confessional, storytelling poet has rarely been equaled. Her revelations become shared emotional truth with readers. The collection's new introduction by poet and Green Mountains Review editor Elizabeth A. I. Powell gives context to the long wake of Wakoski's inspiring influence on generations of readers. Dancing on the Grave of a Son of a Bitch is for anyone who ever lost a love and wishes to embrace the freedom, rather than the pain, it can bring.