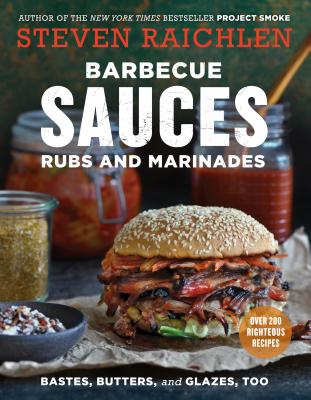 By Steven Raichlen
$17.95
Currently Out of Stock - Available to Ship From Our Warehouse in 3-5 Days

Barbecue sauces, rubs, and marinades are every griller’s secret weapon—the flavor boosters that give grilled food its character, personality, depth, and soul.

There are over 200 recipes in all, including a full sampler of dinner recipes using the sauces. And the book now has full-color photographs throughout. It’s the essential companion cookbook for every at-home pitmaster looking to up his or her game.

Steven Raichlen is the author of the New York Times bestselling Barbecue! Bible® cookbook series, which includes the new Brisket Chronicles, Project Fire, Barbecue Sauces, Rubs, and Marinades; Project Smoke; The Barbecue Bible; and How to Grill. Winners of 5 James Beard awards and 3 IACP awards, his books have been translated into 17 languages. His TV shows include the public television series Steven Raichlen’s Project Fire (currently in its 2nds season), Project Smoke; Primal Grill; and Barbecue University; the French language series Le Maitre du Grill, and the Italian series Steven Raichlen Grills Italy.  Raichlen has written for the New York Times, Esquire, and all the food magazines; and is the founder and dean of Barbecue University. In 2015, he was inducted into the Barbecue Hall of Fame. His website is www.barbecuebible.com.