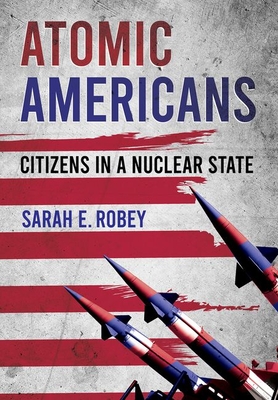 At the dawn of the Atomic Age, Americans encountered troubling new questions brought about by the nuclear revolution: In a representative democracy, who is responsible for national public safety? How do citizens imagine themselves as members of the national collective when faced with the priority of individual survival? What do nuclear weapons mean for transparency and accountability in government? What role should scientific experts occupy within a democratic government? Nuclear weapons created a new arena for debating individual and collective rights. In turn, they threatened to destabilize the very basis of American citizenship.

As Sarah E. Robey shows in Atomic Americans, people negotiated the contours of nuclear citizenship through overlapping public discussions about survival. Policymakers and citizens disagreed about the scale of civil defense programs and other public safety measures. As the public learned more about the dangers of nuclear fallout, critics articulated concerns about whether the federal government was operating in its citizens' best interests. By the early 1960s, a significant antinuclear movement had emerged, which ultimately contributed to the 1963 nuclear testing ban. Atomic Americans tells the story of a thoughtful body politic engaged in rewriting the rubric of rights and responsibilities that made up American citizenship in the Atomic Age.