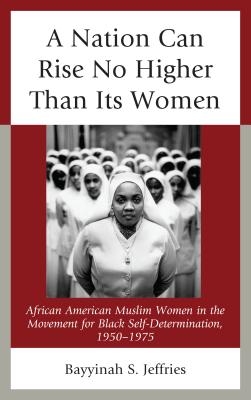 A Nation Can Rise No Higher Than Its Women: African American Muslim Women in the Movement for Black Self Determination, 1950-1975 challenges traditional notions and interpretations of African American, particularly women who joined the Original Nation of Islam during the Civil Rights-Black Power era. This book is the first major investigation of the subject that engages a wide scope of women from "The Nation" and utilizes a wealth of primary documents and personal interviews to reveal the importance of women in this community. Jeffries reveals that women were respected in the movement and maintained a very clear and often sought after voice in the advancement of the Original Nation of Islam. A Nation Can Rise No Higher Than Its Women replaces the typical portrait of the subservient and irrelevant African American Muslim woman with a far more accurate picture of their integral leadership and substantial contributions to the rise of Islam and black consciousness in the self-determination movement in the United States and beyond during the Civil Rights-Black Power era.