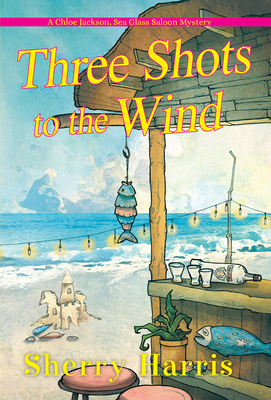 This is book number 3 in the A Chloe Jackson Sea Glass Saloon Mystery series.

The third installment in Sherry Harris’s Agatha Award-nominated series finds former Chicago librarian Chloe Jackson loving her new life as a bartender in Florida…until a surprise visit from her Windy City ex-fiancé ends with him blown away in the Panhandle!

Saloon owner Chloe Jackson appears to have a secret admirer. She’s pouring drinks at the Sea Glass Saloon in Emerald Cove when an airplane flies by above the beach with a banner reading I LOVE YOU CHLOE JACKSON. She immediately rules out Rip Barnett. They are in the early stages of dating and no one has said the L word. Then a bouquet of lilacs—her favorite flower—is delivered to the bar, followed by an expensive bottle of her favorite sparkling wine. It couldn’t be…

Sure enough, her ex-fiancé from Chicago has flown down to Florida for an accountants’ convention. But is he trying to mix business with pleasure and win her back? Unfortunately he’s not in a hotel conference room, he’s floating facedown in the lake next to her house, clutching a photo of Chloe. Who murders an accountant on a business trip—it just doesn’t add up. When Rip becomes the prime suspect, Chloe is determined to find the secret murderer. But if she isn’t careful, it may be closing time and lights out for her…

Sherry Harris is the two-time Agatha Award–nominated author of the Sarah Winston Garage Sale Mystery series and the Chloe Jackson Sea Glass Saloon mysteries. She is a past president of Sisters in Crime, and a member of the Chesapeake Chapter of Sisters in Crime, the New England Chapter of Sisters in Crime, Mystery Writers of America, and International Thriller Writers. In her spare time Sherry loves reading and is a patent holding inventor. Sherry, her husband, and guard dog Lily are living in northern Virginia until they figure out where they want to move to next. Visit her at SherryHarrisAuthor.com.