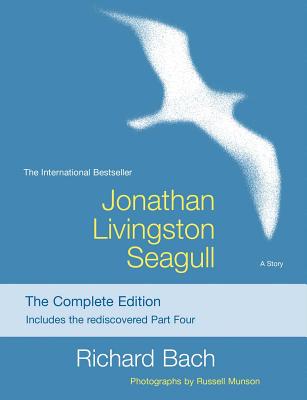 Experience Jonathan Livingston Seagull’s timeless and inspirational message like never before in the new complete edition of this philosophical classic, perfect for readers of all ages—now with a fourth part of Jonathan’s journey, as well as last words from author Richard Bach.

This is the story for people who follow their hearts and make their own rules…people who get special pleasure out of doing something well, even if only for themselves…people who know there’s more to this living than meets the eye: they’ll be right there with Jonathan, flying higher and faster than they ever dreamed.

Richard Bach, a former USAF pilot, gypsy barnstormer, and airplane mechanic, is the author of fifteen books. This, his fourth book, spent two years on the New York Times bestseller list and has continued to inspire millions for decades. His website is RichardBach.com.

Russell Munson began photographing airplanes as a young boy in Denver, Colorado. Photography and flying have been his passions ever since. He is the author and photographer of the book Skyward: Why Fliers Fly and authored and produced the DVD Flying Route 66. He photographs from his Piper Super Cub. His website is RussellMunson.com.