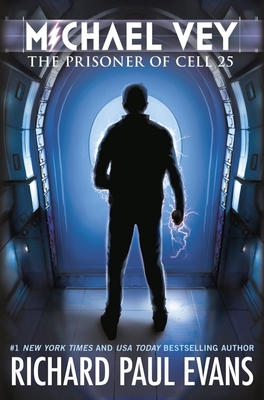 This is book number 1 in the Michael Vey series.

My name is Michael Vey, and the story I’m about to tell you is strange. Very strange. It’s my story.

To everyone at Meridian High School, Michael Vey is an ordinary fourteen-year-old. In fact, the only thing that seems to set him apart is the fact that he has Tourette’s syndrome. But Michael is anything but ordinary. Michael has special powers. Electric powers.

Michael thinks he's unique until he discovers that a cheerleader named Taylor also has special powers. With the help of Michael’s friend, Ostin, the three of them set out to discover how Michael and Taylor ended up this way, but their investigation brings them to the attention of a powerful group who wants to control the electric children – and through them the world. Michael will have to rely on his wits, powers, and friends if he’s to survive.

Michael Vey: The Prisoner of Cell 25

“. . . my 13-year-old grandson picked it up and began reading the first chapter after I had put it down. He remarked, “Papa, hurry up and finish reading this, I want to see where this story goes.” I already know where this is all going: Michael Vey: The Prisoner of Cell 25 is going to be another bestseller for Richard Paul Evans. The book is electric.”

Having read much of Richard Paul Evans’s work, I knew to expect a wonderful story; however, I admit I was skeptical about reading a novel geared toward children 12 years old and up. My skepticism disappeared quickly as I began reading about the book’s protagonist, Michael Vey.

Author Evans has created a character that will entertain both adults and children. I found myself absorbed in the story just several pages in. Michael Vey is, ostensibly, an average teenager, 14 years old, who has the same problems as others in that awkward age group. He finds himself the victim of bullying, mostly due to his facial tics, a result of Tourette’s. He doesn’t fit in with most kids in school, and the girls avoid him whenever possible.

His only friend, Ostin, the class brain—and therefore a nerd to the school jocks—also endures endless bouts of pranks and teasing. The two likeable adolescents form a bond that enables them to endure the constant gauntlet laid down by their classmates.

At one point in the story an incident occurs in which Michael discovers he has a secret power—he’s electric. Although his mother has known this about her son for some time, Michael is just now discovering his abnormal abilities can be used to his advantage.

As the story develops, Mr. Evans creates moral dilemmas that Michael and his friends must face. Questions of ethics and evil versus good become pivotal points and serve to develop a moral compass for the youngsters, both in the story and hopefully for the children reading the book.

There are plenty of thrills and adventure in this well-written novel, one that readers will feel comfortable in having their sons and daughter read. In fact, my 13-year-old grandson picked it up and began reading the first chapter after I had put it down. He remarked, “Papa, hurry up and finish reading this, I want to see where this story goes.”

I already know where this is all going: Michael Vey: The Prisoner of Cell 25 is going to be another bestseller for Richard Paul Evans. The book is electric.

Reviewer John M. Wills is the author of Gripped by Fear (TotalRecall Publications), the second novel in the Chicago Warriors Thriller Series. His book, Targeted, won 1st Place in 2011 at the Public Safety Writers Association Convention; he is also a former Chicago Police Officer and retired FBI Agent.

Ninth grade can be brutal, especially if you are an undersized boy dealing with Tourette’s syndrome. Add bullies, disingenuous authority figures, a geeky best friend, a loving but financially strapped parent, and you have a relatable protagonist who just happens to have an amazing superpower. Michael Vey can zap people with electricity. With his mother’s help, he has been able to keep his “mutation” a secret until the eventful day when popular cheerleader, Taylor, witnesses him defending himself against three tormentors. This event sets into action a chain of discoveries, deceit, and destruction that brings together an unlikely group of young people who must work together to save themselves and others. Throughout these adventures, the author interweaves a plausible scientific explanation for Michael’s powers: sixteen years ago, seventeen babies were inadvertently given special abilities. Now, evil powerbrokers want to use these young people to cause international mayhem and gain wealth through extortion. Short chapters with intriguing titles, excellent writing, and engaging characters make this action-packed story a compulsively entertaining read. The tale progresses with altering points of view. Michael tells his story in first-person and Taylor’s tale is narrated in third-person. This first book of a planned series has a satisfying conclusion but leaves the reader determined to discover what the next book, Rise of the Electroclan, has in store for our young hero and his friends. Though contemporary and edgy, this book contains no bad language, sex, or gratuitous violence. This is a book Rick Riordan’s fans will want to read.
VOYA, October 2011

Evans, Richard Paul
Michael Vey: The Prisoner of Cell 25
2011. 336pp. $17.99 hc. Simon Pulse (Simon & Schuster). 978-1-4516-5650-3. Grade 7 & up
Like Richard Evans’ adult novels, this title has a message of hope and love. However, this book also has pure adventure, science fiction, and creepy bad guys. Michael Vey has been hiding a secret all his life: he has a superpower. Sixteen other children born in the same hospital at the same time also exhibit unusual electromagnetic powers. Michael and Taylor are the only ones who haven’t been collected by the evil, power hungry men. With some help from others, Michael and Taylor free the prisoners of the twisted Elgin Academy where they are held. The book ends with Michael, Taylor, and their new friends banding together to rescue Michael’s mother, setting the scenario for a sequel. Although the book starts out rather slowly, the pace picked up. Readers will be looking forward to the next book in the series. Kyla M Johnson, Librarian, Farmington (New Mexico) High School [Editor’s Note: Available in e-book format.]
Recommended
Library Media Connection, Jan/Feb 2012

Michael Vey: Prisoner of Cell 25, by Richard Paul Evans, is one of those books that you’d better give yourself time to read because once you begin, you won’t stop! Michael Vey goes to high school in Idaho where he’s keeping a secret. He has strange electric powers and soon discovers there’s another girl who has similar powers. When both the girl and his mom are kidnapped, the action accelerates! There are more books planned in this series.

EVANS, Richard Paul. Michael Vey: The Prisoner of Cell 25. 336p. S & S/Pulse/Mercury Ink. 2011. Tr $17.99. ISBN 978-1-4516-6183-5; ebook $9.99. ISBN 978-1-4516-5822-4. LC number unavailable.
Gr 5-9–Michael Vey, 14, has problems. Not only does he suffer from Tourette’s syndrome, but he also has electricity coursing through his body. He can shock people without rubbing his feet on the carpet; he can jump-start his mother’s car by holding the battery connectors and “surging,” and he can knock bullies who attack him off their feet. Michael and his mother have moved to Idaho because there was an “incident” in his former town, and now he discovers that the prettiest girl in his new school has powers, too. Taylor can read people’s minds. Ostin, Michael’s best friend, doesn’t have powers, but he is wicked smart and helps them to figure out that there is more to the mystery than the fact that they were born in the same hospital within days of each other. Soon there is a terrifying adventure afoot when they are captured and introduced to others with powers who, under the lead of the sinister Hitch, have kidnapped Michael’s mother and have evil plans for the world. The dialogue and interactions among the teens seem more like they belong in the 1950s rather than today, but the fast-paced action and cool powers will probably outweigh any negatives.–Jake Pettit, Thompson Valley High School, Loveland, CO
SLJ, November 2011

"Evans (The Christmas Box) enters the YA market with this fast-paced... tale of a teenager with superpowers and the conspiracy that created him... Evans delivers a pair of believable lead characters--Taylor has wits and personal integrity, while Michael's Tourette's syndrome, coupled with an emotional jolt from his past, adds dimension."

"My kind of book-- fast, funny, and strange. Once Michael's astounding powers are revealed, the shocks keep coming chapter after chapter."

"Michael Vey is one of the most original thrillers I've come across in years. It's rare that a book can appeal to a young adult just as much as their parents-but Evans has pulled it off."

"Michael Vey is fantastic. I simply couldn't put it down. I believe Michael Vey is every bit as good as Twilight or Harry Potter."

“Michael Vey: The Prisoner of Cell 25 by Richard Paul Evans is a fantastic read…because of the realistic writing, the likable characters, and a plot that guarantees non-stop action from almost the first page…Any teen into action, adventure or science fiction will want to make sure Michael Vey is on his or her bookshelf.”
– Chicago Examiner.com

“Young super hero fans will enjoy this new release...With mystery, suspense, and plenty of thrills – Michael Vey is highly entertaining. With more psychological excitement than action, the intensity builds to a climatic ending with more than a few surprises along the way.”
– SciFiChick.com

“A fast paced, entertaining read with an engrossing storyline and well developed characters…I think [Michael Vey] is going to be a fabulous new series by Richard Paul Evans. It’s exciting, full of action, snark, unique powers and has a group of teens who are worth reading about…I definitely recommend picking this one up.”

“Michael Vey is electrifyingly awesome. This new series …will thrill, shock, amaze and entertain male and female readers of all ages…I loved this book and can’t wait for the sequel, RISE OF THE ELGEN, which can’t get here fast enough.”