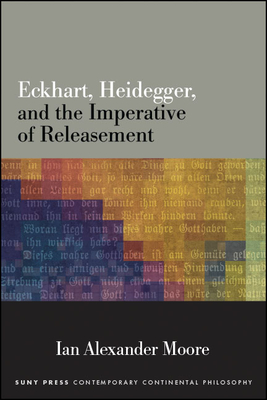 In the late Middle Ages the philosopher and mystic Meister Eckhart preached that to know the truth you must be the truth. But how to be the truth? Eckhart's answer comes in the form of an imperative: release yourself, let be. Only then will you be able to understand that the deepest meaning of being is releasement and become who you truly are. This book interprets Eckhart's Latin and Middle High German writings under the banner of an imperative of releasement, and then shows how the twentieth-century thinker Martin Heidegger creatively appropriates this idea at several stages of his career. Heidegger had a lifelong fascination with Eckhart, referring to him as "the old master of letters and life." Drawing on archival material and Heidegger's marginalia in his personal copies of Eckhart's writings, Moore argues that Eckhart was one of the most important figures in Heidegger's philosophy. This book also contains previously unpublished documents by Heidegger on Eckhart, as well as the first English translation of Nishitani Keiji's essay "Nietzsche's Zarathustra and Meister Eckhart," which he initially gave as a presentation in one of Heidegger's classes in 1938.

Ian Alexander Moore is a faculty member at St. John's College in Santa Fe, New Mexico. He is the coeditor (with Alan D. Schrift) of Transcendence and the Concrete: Selected Writings by Jean Wahl.