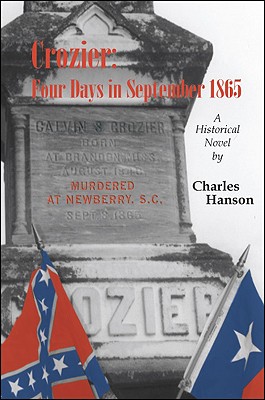 Crozier: Four Days in September 1865 is a factual account in story form of how a Confederate soldier from Texas became a hero in the small southern town of Newberry, South Carolina, in 1865. It is the story of a young man, long a prisoner in a Union prison camp near Chicago, who upheld his character, his principles, and his courage in the face of death in protecting two young ladies from insults from a US Colored soldier. He then protected an innocent stranger from harm when the stranger was wrongfully arrested for Crozier's actions. It is rare that one's man's presence for such a short period of time can have such a positive impact on a community as that of Calvin Crozier. His story is one that deserves retelling. It is one where character and courage transpire, but also can carry over upon future generations.

This is also a brief look at the soldiers that carried out an illegal execution while occupying the South immediately following the Civil War. The 33rd US Colored Troops are a contrast of the renowned 54th Massachusetts in background, training, character, and leadership of their officers. It is a brief look based on documented facts not intended to discredit who and what these men were, but to present them in a factual account of the settings and circumstances of their brief existence in the South during and immediately following that terrible period in American history.