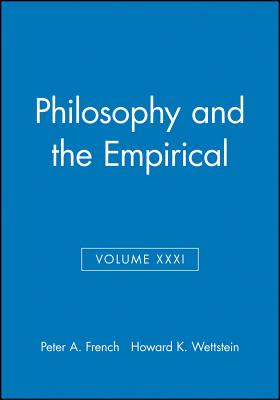 By Peter A. French (Editor), Howard K. Wettstein (Editor)
$69.90
Not available for purchase

This collection of essays focuses on a current issue of central important in contemporary philosophy, the relationship between philosophy and empirical studies.

Peter A. French is the Lincoln Chair in Ethics and Professor of Philosophy at Arizona State University.He was the founding Director of the Lincoln Center for Applied Ethics from 2000 to 2013. Before that he was the Cole Chair in Ethics, Director of the Ethics Center, and Chair of the Department of Philosophy of the University of South Florida. He was the Lennox Distinguished Professor and Chair of Philosophy at Trinity University, and served as Exxon Distinguished Research Professor in the Center for the Study of Values at the University of Delaware. During his distinguished 48-year career in academia he has also been a professor of philosophy at the University of Minnesota, Dalhousie University, Nova Scotia, and Northern Arizona University. Dr. French earned a BA from Gettysburg College, an MA from the University of Southern California, a Ph.D. from the University of Miami and did post-doctoral work at Oxford University. He was awarded a Doctor of Humane Letters (L.H.D.) degree for his work in philosophy and ethics from Gettysburg College in 2006.Dr. French has an international reputation in ethical and legal theory and in collective and corporate responsibility and criminal liability. He is the author of twenty books including War and Moral Dissonance; The Virtues of Vengeance; Cowboy Metaphysics; Ethics and College Sports; Corporate Ethics; Responsibility Matters; Collective and Corporate Responsibility; Ethics in Government; The Scope of Morality; Corporations in the Moral Community; The Spectrum of Responsibility; Corrigible Corporations and Unruly Laws; and War and Border Crossings: Ethics When Cultures Clash. He is a founding editor with Howard Wettstein of Midwest Studies in Philosophy, a leading annual book series in analytic philosophy. As a single author, co-author, and editor he has contributed 61 books to the philosophical literature.Dr. French has lectured at locations around the world. Some of his works have been translated into Chinese, Japanese, German, Italian, French, Serbian, and Spanish. Dr. French also was the editor of the Journal of Social Philosophy for 16 years and general editor of the Issues in Contemporary Ethics series. He has published scores of articles in the major philosophical and legal journals and reviews, many of which have been anthologized. In 2002 Dr. French was appointed to the Board of Officers of the American Philosophical Association. In 2008 the APA's Newsletter on Philosophy and Law dedicated an issue to him. Howard K. Wettstein is Professor of Philosophy, and Director of the University Honors Program at the University of California, Riverside. He holds a B.A. degree in Philosophy from Yeshiva College, an M.A. and a Ph.D. from the City University of New York. Wettstein has published two books, The Magic Prism: An Essay in the Philosophy of Language (2004) and Has Semantics Rested On a Mistake?, and Other Essays (1991) and a number of papers in the philosophy of language, for many years the focus of his research. During the last decade he has also worked in the philosophy of religion, publishing papers on topics like awe, doctrine, the problem of evil, and the viability of philosophical theology. He is currently at work on a book in the philosophy of religion. He is a senior editor (with Peter French) of Midwest Studies in Philosophy, and has edited a number of other volumes including Themes From Kaplan (1989, co-edited) and Diasporas and Exiles (2002).