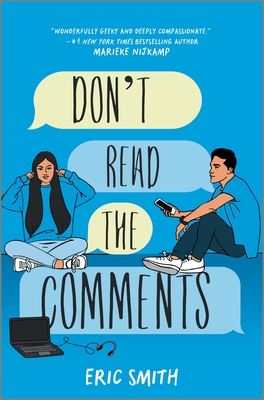 Don't read the comments, but you should totally read Don't Read the Comments by Fountain favorite, Eric Smith!  Eric takes on internet trolls, youtube fame, and the very real threat of when the violence and bullying online spill over into real life. Plus it's the very sweet, wonderful, and adorable story of two people meeting online, and making a real connection that strengthens them both. Also, tons of fun movie, game and television references. And we have some signed copies from Eric's last visit to RVA!

We all need a place to escape from the real world. For Divya and Aaron, it's the world of online gaming. While Divya trades her rising-star status for sponsorships to help her struggling single mom pay rent, Aaron plays as a way to fuel his own dreams of becoming a game developer - and as a way to disappear when his mom starts talking about medical school. After a chance online meeting, the pair decides to team up - but soon find themselves the targets of a group of internet trolls who begin launching a real-world doxxing campaign, threatening Aaron's dream and Divya's actual life. They think can drive her out of the game, but Divya's whole world is on the line... And she isn't going down without a fight. "Wonderfully geeky and deeply compassionate." --Marieke Nijkamp, #1 New York Times Bestselling Author.