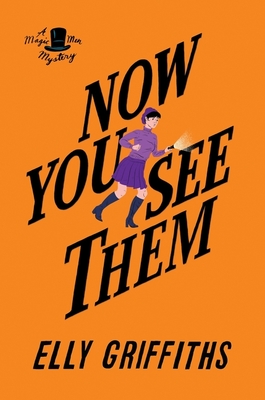 By Elly Griffiths
$15.99
Available to Ship From Our Warehouse

The fifth book in the Magic Men series, Now You See Them is a wild mystery with detective Edgar Stephens and the magician Max Mephisto, as they investigate a string of presumed kidnappings in the swinging 1960s.

The new decade is going well for Edgar Stephens and his good friend the magician Max Mephisto. Edgar is happily married, with children, and promoted to Superintendent. Max has found fame and stardom in America, though is now back in England for a funeral, and a prospective movie job. Edgar’s new wife, though—former detective Emma—is restless and frustrated at home, knowing she was the best detective on the team.

But when an investigation into a string of disappearing girls begins, Emma sees her chance to get back in the action. She begins her own hunt, determined to prove, once and for all that she’s better than the boys. Though she’s not the only one working toward that goal—there’s a new woman on the force, and she’s determined to make detective. When two more girls go missing, both with ties to the group, the stakes climb ever higher, and Max finds himself drawn into his own search.

Who will find the girls first? And will they get there in time?

A Bustle Best Book of December

“A limitless talent, a novelist in the humane vein of Louise Penny and Kate Atkinson, Elly Griffiths is one of my flat-out favorite contemporary suspense writers. No matter the book—a Ruth Galloway mystery, a Magic Men caper, an ambitious, assured non-series thriller—she innovates and excites; I turn each final page both deeply satisfied and ravenous for more.”
—AJ Finn

"Griffiths's plotting skills, well known from her Ruth Galloway mystery series, are on full display here, as is her talent for sharp thumbnail sketches of even minor characters...The author builds the tension slowly, then swiftly ramps up the intensity of the case and its implications...With glimpses into the colorful youth culture of the 1960s and flashes of Griffiths's dry wit, Now You See Them is an enjoyable addition to an entertaining series."
—Shelf Awareness

"Full of fun and expertly plotted, this is in many ways a cosy read but there is real depth to the way the characters cope not only with changing times but changes in themselves as they mature."
—S Mag, Sunday Express