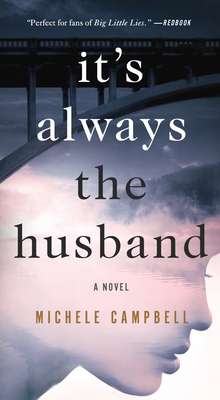 A suspenseful, absorbing novel that examines the complexities of friendship, It’s Always the Husband by Michele Campbell will keep readers guessing right up to its shocking conclusion.

“A riveting tale of love, hate, and murder.”—Us Weekly

“A page-turning whodunit that will speak to anyone who’s ever had a frenemy.”—Ruth Ware, bestselling author of The Woman in Cabin Ten

“Fans of Gillian Flynn, meet your next obsession.”—BuzzFeed

They first met as college roommates and soon became inseparable, despite their many differences. Kate was beautiful, wild, wealthy, and damaged. Aubrey came from the wrong side of the tracks, and wanted more than anything to distance herself from her past. Jenny was brilliant, ambitious, and determined to win big at all costs. As an unlikely alliance formed, Kate, Aubrey, and Jenny swore they would always be friends.

Twenty years later, the three women—all married, and deemed successful by any measure—are together again. But one of them is standing at the edge of a bridge…and someone is urging her to jump. How did it come to this? Who is to blame? Is it true that it’s always the husband who commits the worst crimes against his wife—or is someone else behind a sinister plot to tear these three women apart?

Praise for It's Always the Husband:

“A page-turning whodunnit that will speak to anyone who’s ever had a frenemy.” –Ruth Ware, bestselling author of The Woman in Cabin Ten

"Fans of Ruth Ware and Gillian Flynn meet your next obsession." —BuzzFeed

"In the tradition of Big Little Lies comes the excellently titled It's Always the Husband, a thriller about three friends–frenemies, really–who met as college roommates." –New York Post