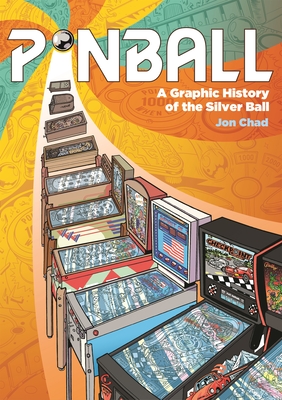 As a pinball nerd myself, I was really eager to get my hands not his one. It's just as good as I'd hoped! Jon has made a well-written, well-illustrated history of pinball that is great for pros and beginners alike. There are fascinating facts and tips to improve your shots and they are all packaged in a bright, fun graphic novel.  I can't wait to get this into my local pinball collective and women's league!

in this dynamic, nonfiction graphic novel, Jon Chad illustrates the little-known story of pinball—how it works and why it all matters in an age of special effects and on-screen gaming.

In 1976, champion player Roger Sharpe stepped up to a pinball machine in a Manhattan courtroom. The New York City Council had convened to consider lifting the city’s ban on pinball—a game that had been outlawed since 1942 for its supposed connections to gambling and organized crime. Sharpe was there to prove that, unlike a slot machine, pinball wasn’t a game of chance designed to fleece its players—it was a game of skill that required a measure of patience, coordination, and control. To prove his point, he proclaimed that he would launch his ball into the center lane at the far end of the playfield—much like Babe Ruth famously pointing to the fences. Sharpe pulled back the plunger and released, and the fate of this industry and art form hung in the balance.

Thus opens Jon Chad’s comprehensive graphic novel to the history of the captivating, capricious—and at times infuriating!—game of pinball. Tracing pinball’s roots back to the Court of King Louis XIV, through the immigrant experience of early 20th century America, the post-War boom and bust, right up to the present day, Chad charmingly ushers readers through the myriad facets of this most American of pursuits—capturing not just the history but also the artistry, cultural significance, and even the physics of the game.

Jon Chad is obsessed with giant robots, screen-printing, and bookmaking. Chad has been commissioned by Cartoon Network to make artist books based on shows like Adventure Time and The Amazing World of Gumball. He is the illustrator of Science Comics: Solar System, and the author of Leo Geo, Science Comics: Volcanoes, Science Comics: The Periodic Table of Elements, and Pinball: A Graphic History of the Silver Ball. Jon is also the creator of the multi-format immersion narrative BAD MASK.

""In this nonfiction work, Chad tells the improbably exciting story of the development of the pinball machine, including the fact the game was outlawed for nearly 30 years for its connection to gambling and the mob." —New York Times

"The author successfully packages the minutiae of pinball’s existence with dynamic art and vivid coloring assisted by Luke Healy. Cracking this one open evokes the delight of snapping back the launcher in the arcade." —Publisher's Weekly, starred review

"This is a vibrant, colorful love letter to pinball that will leave readers longing for the sounds of the arcade... Perfect for both fans of microhistories and the history of gaming." —Booklist

“There is an inherent energy and soul to this book that is inescapable. It is pinball in its purest form.”
—Roger C. Sharpe, noted player, designer, author, and the “man who saved pinball”