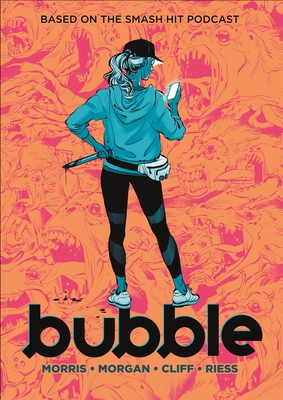 Based on the smash-hit audio serial, Bubble is a hilarious high-energy graphic novel with a satirical take on the “gig economy.”

Built and maintained by corporate benevolence, the city of Fairhaven is a literal bubble of safety and order (and amazing coffee) in the midst of the Brush, a harsh alien wilderness ruled by monstrous Imps and rogue bands of humans. Humans like Morgan, who’s Brush-born and Bubble-raised and fully capable of fending off an Imp attack during her morning jog. She’s got a great routine going—she has a chill day job, she recreationally kills the occasional Imp, then she takes that Imp home for her roommate and BFF, Annie, to transform into drugs as a side hustle. But cracks appear in her tidy life when one of those Imps nearly murders a delivery guy in her apartment, accidentally transforming him into a Brush-powered mutant in the process. And when Morgan’s company launches Huntr, a gig economy app for Imp extermination, she finds herself press-ganged into kicking her stabby side job up to the next level as she battles a parade of monsters and monstrously Brush-turned citizens, from a living hipster beard to a book club hive mind.

Jordan Morris is a writer and podcaster living in Los Angeles. He's worked on projects for Comedy Central, Cartoon Network and Disney. He's also the co-host of the well-liked but not super popular podcast Jordan, Jesse, Go! He lives with one cat and still knows all the fatalities for the original Mortal Kombat. He is beyond thrilled to be making comics. Seriously, it feels like a dream.

Sarah Morgan is a writer for TV and radio. Her credits include Intelligence, the BAFTA Film Awards 2020, Not Going Out, Horrible Histories, the Tracey Ullman Show, That Mitchell And Webb Sound and Bigipedia. She is also the creator and host of a spooky podcast called The Fear. She lives in London with her family and enjoys ales served at the appropriate temperature.

Tony Cliff is the New York Times Bestselling author of the critically-acclaimed Delilah Dirk series of adventure graphic novels. He has also written and illustrated Let's Get Sleepy, a seek-and-find children's story about cats, a mouse, and the value of a day well-lived. He lives in Vancouver, BC, is a veteran of that city's animation industry, and is a long-time Jordan, Jesse, Go! listener.

Natalie Riess is a cartoonist from Pennsylvania. She now lives in Austin, TX, where she makes comics with her girlfriend and gets yelled at by their beautiful cat. She loves to draw food, nature, and horrible plant monsters. Her previous titles include Space Battle Lunchtime and Snarlbear.

"The critique of the gig economy is just discernible beneath the smashmouth confrontations, and the relationship comedy (tangled on-again, off-again connections and flirtations throughout) is surprisingly earnest. It’s a recklessly fun, hoot and holler of a ride." —Publishers Weekly, starred review

"Wild, adventurous, quick-witted, and current!" — Ryan North, How to Invent Everything

“Bubble is timely satire, but NOT what ‘timely satire’ usually means (BORING). Instead, it’s ridiculous, warm, absurdly funny, genuinely human, and, what is most important to me: ANTI-MONSTER. I would like to be trapped in a bubble with these people—the ones who made it, and the characters they created. BUT NO MONSTERS PLEASE. Seriously. I’ve had enough of those guys!“ —John Hodgeman, Medallion Status

“A timely skewering of the Millennial mindset? Check. Beasts that could disembowel you with the flick of a wrist? Check. An appearance by the bassist of our favorite band from high school? Check. Bubble meets all our criteria for a work of fiction. We’re in.” —Rhett and Link, Good Mythical Morning, The Lost Causes of Bleak Creek

"Bubble is an allegorical tale of the horrors facing American millennials that just also happens to be a perfectly exhilarating, monster-hunting action adventure. Wait, don't buy it yet, because you should be warned it's also beautifully humane and hilarious. OK, now you can buy it."—Justin McElroy, The Adventure Zone