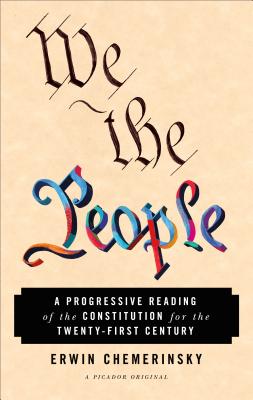 "This work will become the defining text on progressive constitutionalism — a parallel to Thomas Picketty’s contribution but for all who care deeply about constitutional law. Beautifully written and powerfully argued, this is a masterpiece." --Lawrence Lessig, Harvard Law School, and author of Free Culture

Worried about what a super conservative majority on the Supreme Court means for the future of civil liberties? From gun control to reproductive health, a conservative court will reshape the lives of all Americans for decades to come. The time to develop and defend a progressive vision of the U.S. Constitution that protects the rights of all people is now.

University of California Berkeley Dean and respected legal scholar Erwin Chemerinsky expertly exposes how conservatives are using the Constitution to advance their own agenda that favors business over consumers and employees, and government power over individual rights.

But exposure is not enough. Progressives have spent too much of the last forty-five years trying to preserve the legacy of the Warren Court’s most important rulings and reacting to the Republican-dominated Supreme Courts by criticizing their erosion of rights—but have not yet developed a progressive vision for the Constitution itself. Yet, if we just look to the promise of the Preamble—liberty and justice for all—and take seriously its vision, a progressive reading of the Constitution can lead us forward as we continue our fight ensuring democratic rule, effective government, justice, liberty, and equality.

Erwin Chemerinsky is the dean of UC Berkeley School of Law. His writings have appeared in The New York Times, Los Angeles Times, The Washington Post, and The Boston Globe, among other publications. His books include The Conservative Assault on the Constitution and The Case Against the Supreme Court, among many others. In January 2017, National Jurist magazine again named him the most influential person in legal education in the United States.

"Thank heaven for Erwin Chemerinsky. The dean of constitutional law has done it again; his latest book, We the People, really is his finest work. In his usual clear and concise fashion, Chemerinsky gives us a framework for understanding both the United States Constitution and the current threats to our democracy. This book could not have come at a better time. It is a life preserver for those who feel adrift in the uncharted waters of the Trump era." --Laurie L. Levenson, Los Angeles Review of Books

“A blueprint for resistance and change . . . it’s crucial as a potential umbrella under which all forms of progressive defiance can actualize a vision of the preamble’s promise."—Paste Magazine

“Dean Erwin Chemerinsky, one of our nation’s leading constitutional scholars, has written a masterful guide on how progressives should think about constitutional law as we move forward in the twenty-first century. After thoroughly discrediting the conservatives’ bogus claims of being committed to originalism, judicial restraint, and “value-neutral judging,” Chemerinsky identifies five fundamental values that should guide our interpretation of the Constitution: ensuring democratic government, providing effective governance, establishing justice, securing liberty, and achieving equality. He then brilliantly demonstrates both why those values should be at the center of constitutional interpretation and how they should play out in the resolution of a broad range of specific constitutional controversies. This is a thoughtful, accessible, and engaging enterprise that should be read by anyone contemplating law school, by all law students, and by lawyers (and other citizens) throughout the land.” --Geoffrey R. Stone, Edward H. Levi Distinguished Professor of Law, The University of Chicago, and author of The Los Angeles Times Book Prize winner Perilous Times: Free Speech in Wartime

"With characteristic clarity, Dean Chemerinsky synthesizes his encyclopedic knowledge of the Constitutional canon to offer a detailed guide to a Progressive interpretation of the Constitution. From the text of the Preamble, he identifies four key principles undergirding the Constitution: a democratic form of government, an effective government, fair treatment for the people of the nation and the protection of individual liberty. To these he adds a final, implicit principle that is made explicit with the adoption of the Fourteenth Amendment: equality. Using these five principles as his guide, Chemerinsky walks his readers through some of the major legal controversies of our time, explaining how these principles point toward a Progressive understanding of the proper role of government on issues ranging from federalism to presidential power and from the rights of the criminally accused to campaign finance laws. Accessible to the lay reader, but of interest to scholars, this book serves as a useful primer on Constitutional case law, a practical guide to the constitutional arguments that Progressives can make both in and out of the courtroom, and a message of hope in the long-term possibility of justice." --Jennifer Chacon, Professor of Law, UCLA School of Law

"Demolishing the rationalization (the imagined “original” intent of 18th century men) used by a Republican court to justify reactionary public policy, Chemerinsky explains why the constitutional principles of democratic and effective government committed to establish security, justice, liberty and equality can, going forward, be the bases for authoritative challenges to the Trump court’s partisan agenda." --Richard Rothstein, author of Color of Law, long-listed for the National Book Award

"This work will become the DEFINING text on progressive constitutionalism — a parallel to Thomas Picketty’s contribution but for all who care deeply about constitutional law. Beautifully written and powerfully argued, this is a masterpiece." --Lawrence Lessig, Harvard Law School, and author of Free Culture

“A catalyst for fundamentally changing the nation’s most important and . . . least democratic institution . . . A scholar with intellectual power, passion and pluck.”—Los Angeles Review of Books

"One of the shining lights of legal academia."—The New York Times


Praise for The Conservative Assault on the Constitution

"Our Constitution depends on the courts to keep it alive; we all depend on Erwin Chemerinsky to remind us why that is so important. This book is essential reading for anyone who cares about preserving our constitutional birthright."—Susan N. Herman, President, American Civil Liberties Union

"Erwin Chemerinsky knows the Constitution as a legal scholar and the Supreme Court as a lawyer who represents clients there. It's a rare and powerful combination that makes him uniquely qualified to write this disturbing and persuasive book about the impact of the current Supreme Court's approach to constitutional interpretation."—Linda Greenhouse, lecturer, Yale Law School; former New York Times Supreme Court correspondent