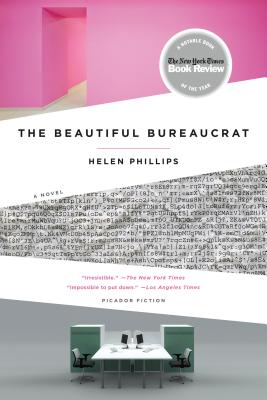 “Kafka would love The Beautiful Bureaucrat. . . . It’s a surprising revelation of a book from an uncompromising author as unique as she is talented.” —NPR

In a windowless building in a remote part of town, a newly employed young woman, Josephine, inputs an endless string of numbers into something known only as The Database. As the days inch by and the files stack up, Josephine feels increasingly anxious in her surroundings—the office’s scarred pinkish walls take on a living quality, the drone of keyboards echoes eerily down the long halls. When one evening her husband Joseph disappears and then returns, offering no explanation as to his whereabouts, her creeping unease shifts decidedly to dread, in Helen Phillips's The Beautiful Bureaucrat.

Helen Phillips is the recipient of a Rona Jaffe Foundation Writer's Award and the Italo Calvino Prize and more. She is the author of the widely acclaimed The Beautiful Bureaucrat. Her debut collection And Yet They Were Happy was named a notable book by The Story Prize. Her work has appeared in Tin House, Electric Literature, and The New York Times. An assistant professor of creative writing at Brooklyn College, she lives in Brooklyn with her husband and children.

“Unusual...deeply interesting...It's an irresistible setup and if that's all there were, it would be enough...[But] Mrs. Phillips has a wickedly funny eye, a fine sense of pacing, a smooth, winning writing style and a great gift for a telling detail.” —Sarah Lyall, The New York Times

“Riveting...Phillips's thrillerlike pacing and selection of detail as the novel unfolds is highly skilled...What makes The Beautiful Bureaucrat a unique contribution to the body of existential literature is its trajectory, as the story telescopes in two directions, both outward to post macro questions about Gd and the universe, and inward to post intimate inquiries about marriage and fidelity. Ultimately, The Beautiful Bureaucrat succeeds because it isn't afraid to ask the deepest questions.” —Jamie Quatro, The New York Times Book Review

“Equal parts mystery, thriller, and existential inquiry, Phillips's book evokes the menace of the mundane...The Beautiful Bureaucrat asks uneasy questions about work and life, love and power, and where the whole enterprise of one's own small life is swiftly headed.” —Anna Wiener, The New Republic

“Kafka would love The Beautiful Bureaucrat...Bizarre and painfully human...There's not a wasted word, and it's nearly impossible to put down.” —Michael Schaub, NPR

“[The Beautiful Bureaucrat is] a joyride...a very weird, very beautiful, very honest book about the surreal business of working in a city, living in a fertile and dying body, and loving another mortal...While it may have DNA in common with other urban work and life and love stories, with Kafka and Shirley Jackson and Haruki Murakami and the Coen brothers, it really is a new species of tale.” —Karen Russell, Slate

“Propulsive...gorgeous...stark and spare genius...A masterpiece of contrasts...Phillips plays with language in a way that serves both characterization and plot, showcasing her inimitable wit...Beckett and Nabokov would resoundingly applaud...The humor and the seriousness in an absurdist story build a tension that carries the entire world within it. Phillips pulls this off seamlessly...A joy, darkness and terror and all.” —The Seattle Review of Books

“With some of the conspiratorial paranoia of Pynchon, some of the poignant comical darkness of Kafka and some of the interior tenderness of contemporary literary fiction...What Helen Phillips has created is, finally, an intriguing fictional world in which love and language meet their match in routine and necessity - and who, or which, triumphs may be a reader's choice.” —Minneapolis Star-Tribune

“ Uncanny and Kafkaesque...By turns, the novel is goofily funny, creepy and unsettling, life-affirming and sweet, deeply thoughtful and pointedly critical of modern workplace culture...A strange, yet unsettlingly resonant, fable that melds mystery, sci-fi, romance and satire to chillingly skewer the modern workplace yet somehow leave us reaffirmed in our humanity.” —Claire Fallon, The Huffington Post

“[The Beautiful Bureaucrat] revels in its playful and dark take on contemporary life, where everything - reality, love, relationships, the mundane - is out of proportion...if there are any aesthetic legacies to be traced here, they're closer to the fantastical elements found in Gilliam's Brazil, or the fabulism of Calvino, both employed...to dazzling effects...Phillips's vital prose...elevates TBB into a form unto itself.” —Full Stop Magazine

The Beautiful Bureaucrat… is an addictive, uncanny experience…Her prose is exact, at once ominous and droll, and her pacing is perfect. As she probes the mysteries of marriage and mortality, choice and chance, freedom and fate, her pages command close focus—and fly by very fast. —The Atlantic
This novel is so mesmerizing, you'll forget you have a six-hour sojourn ahead of you (and that a stranger has reclined their seat into your lap). The Beautiful Bureaucrat by Helen Phillips is the perfect kind of strange to keep your brain twisted into knots during the flight (think Kafka or Calvino), and the kind of thrilling that'll have you on edge until you've run out of pages to turn. You'll devour this one before wheels-down on the tarmac. —Elle; These 8 Books from 2015 Will Keep You Entertained During Every Holiday Travel Moment

“Like Margaret Atwood and Ursula K. Le Guin before her, Helen Phillips addresses society's ills - or, in this case, the soul-sucking, hope-obliterating work of the low-level bureaucrat - with an insistent eye for originality... The overarching mood... is one of deliciously impending doom, which both science fiction and literary readers will happily, if anxiously, want to see through to its revelation.” —Bustle "August Round-Up"

“Like Margaret Atwood's groundbreaking The Handmaid's Tale, Helen Phillips' The Beautiful Bureaucrat imagines a near future in which the greed and bullying rampant in bureaucratic institutions leaks its toxicity into day-to-day life. The Creep Factor is off-the-charts in The Beautiful Bureaucrat, but so is the quality of the prose, the magnetism of the narrative, and the emotional resonance.” —Bustle

“Helen Phillips' story is slick, and her words are inspired. This certainly won't be the last you'll be hearing from her, so pick up her debut before all of your friends.” —Bustle "Best Books of Summer 2015"

“This book rocks so hard!...I don't think I've been tempted to underline more sentences in a book this year. The Beautiful Bureaucrat is a mind-bender, sci-fi-ish in the way Atwood or Murakami is...” —Book Riot

“The Beautiful Bureaucrat challenges what it means to be a cog in a machine, and how to envision one’s future life when the present feels so unfinished. It’s a must read for giving oneself a different perspective on one’s career, life, and potential to write our fate.” —HelloGiggles

“Part love story, part urban thriller...Intense and enigmatic, tense and tender... It grabs you up, propels you along, and leaves you gasping, grasping, and ready to read it again.” —Kirkus Reviews, starred review

“The Beautiful Bureaucrat...incisively depicts the corporate hell in which young drones toil in faceless buildings, sorting meaningless files according to inscrutable policies...Phillips's black comedy of white-collar... has enough horror and mordant humor to carry the reader effortlessly through its punchy send-up of entry-level institutionalization.” —Publishers Weekly

“Worthy of a Twilight Zone episode...Suspenseful, creepy, and distinct, this work is sparse in style but elaborate in wordplay.” —Library Journal

“[Helen Phillips's] surreal and entertaining debut is a concise, imaginative novel that explores life and death, work and home, personality and professionalism in an almost Orwellian fashion. Precisely chosen language and a fast-paced structure leave readers feeling Josephine's fear along with her, and contemplating their own world.” —BookPage

“Phillips's first novel is peculiar, mysterious, and intriguing, bringing to mind the visceral symbolism of Margaret Atwood's dystopian works. Clever wordplay toys with readers while hinting at a deeper commentary on the meaning of life.” —Booklist

“Author of one of our favorite short story collections of all time, And Yet They Were Happy, Phillips now presents us with a stunning novel that manages to retain the sense of wonder and surreality that is omnipresent in her shorter fiction, while also weaving a complex, chilling plot...There are definitely shades of Murakami in The Beautiful Bureaucrat, but Phillips' style is uniquely her own, and makes for an incredibly compelling read.” —L Magazine

“Helen Phillips is a temporary salve for those of us who've often felt like throttling a large corporation peopled with faceless bureaucrats...Well done.” —Psychology Today

“Thrilling” —Buzzfeed Books "What New Book You Should Read This Summer"

“Told with the light touch of a Calvino and the warm heart of a Saramago, this brief fable-novel is funny, sad, scary, and beautiful. I love it.
” —Ursula K. Le Guin

“A new cup of Kafka in this debut novel from Brooklyn College professor Phillips...makes "The Trial" look like a slap on the wrist.” —The NY Post

“A satisfying parable of love and life, death and birth, and the travails of transposed numbers. The Beautiful Bureaucrat reads like a thriller.” —Joshua Ferris

“The Beautiful Bureaucrat is a thrillingly original debut, formally inventive and emotionally complex. Helen Phillips is one of the most exciting young writers working today, and I envy those who get to discover her work here for the first time.” —Jenny Offill

“Helen Phillips' The Beautiful Bureaucrat has the compulsive quality of a mystery and the furious urgency of a fever dream. I picked it up and read it everywhere: on the subway, over breakfast, in bed when I should have been sleeping, at work when I should have been working. It will coax you into its world with the crystalline precision of its prose, so full of heart and strangeness it might even crawl into your own dreams and find you there.” —Leslie Jamison

“...Absurd, uncanny, tinged with dread...The Beautiful Bureaucrat...is as much about the mysteries of marriage as those of human existence.” —Elliott Holt (author of You Are One of Them), Recommended Reading

“In the bleak hallways of bureaucracy, Helen Phillips explores what it means to make a life one's own. The Beautiful Bureaucrat is a page-turning mystery, a love story and a revelation.” —Ramona Ausubel

“The Beautiful Bureaucrat reads like Borges in Brooklyn, with its cerebral pleasures buttressed by Helen Phillips' precise, resonant depictions of love, marriage, sex, and terrible apartments. It bends from uncanny to unsettling and ends at very deeply satisfying.” —Robin Sloan

“Helen Phillips is a funny, subversive, enigmatic, melancholy wonder. With And Yet They Were Happy she produced one of my favorite recent story collections and now, with The Beautiful Bureaucrat, she has written one of my favorite recent novels, equal parts Franz Kafka and Lydia Davis, a narrative in which the perplexities of work and marriage gradually change their colors to display the perplexities of birth and death. When these pages reached my hands, my first thought was this: Helen Phillips is publishing another book, which means that I can, briefly, revel in it until I start looking for her next.” —Kevin Brockmeier

“With an intriguing premise (and a nod from Ursula K. LeGuin), not to mention that cover, this one looks to be a must read.” —SF Signal