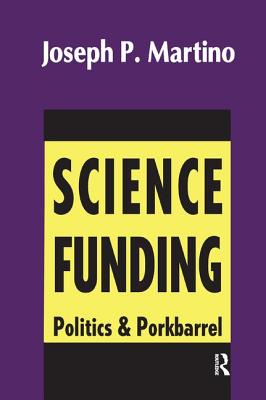 Americans have become resigned to seeing Congress vote money for porkbarrel projects of all kinds-roads, dams, post offices, military installations-in the districts of influential legislators. In recent years Congress has, almost without public notice, extended this form of vote-buying and pandering into a new domain: science. Where formerly scientific funding proposals were evaluated by outside experts on the basis of merit, there is now an increasing consideration of congressional districts and fair geographical distribution. In this ground-breaking volume, Joseph P. Martino offers a critical examination of special-interest funding and the danger it poses to the integrity of American society as a whole, as well as to its scientific component.

Science Funding is distinguished by its comprehensive approach to the structural and historical background of the current situation. It examines the history of science funding from the early twentieth century through present, public vs. to taxpayers, instances of fraud, and the effects of government funding for research in universities.

Martino's survey demonstrates conclusively that government has been inefficient in its funding capacity and that the shortcomings are inherent: political criteria for the support of science, congressional micromanagement, freezing out of innovative ideas, and the favoring of massive projects-Big Science-over small, but significant experimental programs. In his concluding chapter Martino provides an agenda for new thinking on the funding of science. He proposes alternatives that suggest a plurality of approaches is preferable to the current monolithic model, and shows how industrial support, philanthropy, and contributions from the public can be made more effective. Science Funding is a major work on the interaction of science, politics, and society. It will be of interest to sociologists, policymakers, and political scientist, and the research science community.