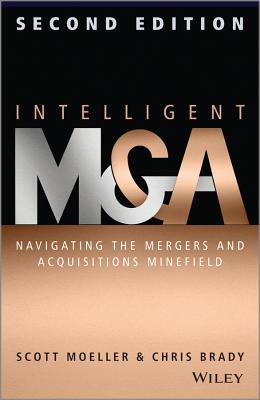 Almost 70% of mergers fail, yet deals are essential for growing world-class companies. Therefore they must use all the tools and techniques at their disposal to improve their chances of success. Applying the techniques advocated in this book can help managers beat the odds - and employees themselves - to have an impact on whether a deal will be successful both for the company and for themselves.

This book looks at the process of a merger or acquisition and pinpoints the areas where business intelligence can raise the odds of success in each phase of the deal. Using techniques developed by governmental intelligence services and a wide range of recent case studies, quotations and anecdotes, the expert authors from the renowned Cass Business School show how to build success into any M&A situation.

The first edition of Intelligent M&A was written in 2006 and published in 2007. This preceded the peak year (2007) of the last merger wave, including the excesses in a number of industries and deals (e.g., financial services with RBS' dramatically failed acquisition of ABN AMRO as a key example), and the global economic downturn that led to a completely new way of operating for many industries and companies.

Therefore, there is a need to update the book to incorporate not just more relevant and up-to-date case studies of deals but to show the 'new' way of operating in a post-Lehman environment. Chapters will be comprehensively re-written and populated with new and relevant case studies.

Scott Moeller is the Director of the Mergers and Acquisitions Research Centre at Cass Business School in London, where he is also Professor in the Practice of Finance. He is widely recognized as an international expert on M&A, appearing frequently on television and in the print media. He was previously a management consultant and investment banker, working for Booz Allen & Hamilton and Morgan Stanley in New York, Tokyo, and Frankfurt, then Deutsche Bank in London. He remains active as a non-executive director of several large European and American companies. Scott is author of Surviving M&A: Make the Most of Your Company Being Acquired (Wiley, 2009). He can be followed on Twitter (@scottmoeller) and www.intelligentmergers.com. Professor Chris Brady is currently Professor of Management Studies and Director of Salford University's Centre for Sports Business; he also acts in an advisory capacity to HE institutions and private equity firms. Prior to these roles he was, most recently, Dean of BPP Business School, Dean of the Business School at Bournemouth University and Deputy Dean responsible for external affairs and business development at the Cass Business School in the City of London. Professor Brady also served in the Royal Navy for 16 years including appointments in the joint HQ intelligence cells during the first Gulf War and the Balkans crises. He is the author of books and articles on subjects as varied as US foreign policy, British Cabinet government and, of course, business.