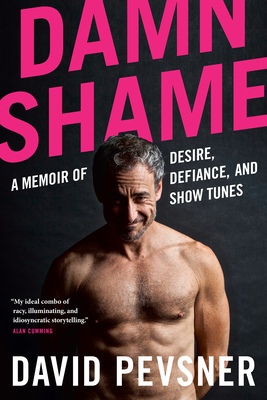 Over the course of his 35-year career in show business, David Pevsner has done it all. He’s acted on Broadway, off-Broadway, in independent films and on numerous TV network shows including Grey’s Anatomy, Modern Family and Criminal Minds.

Damn Shame gives a loud and powerful voice to a generation of mature men who have been conditioned to believe from society (and especially younger members of the gay community) that they are sexually irrelevant, old and undesirable. Pevsner’s life story goes in directions that many couldn’t imagine, but the lessons learned through his experiences will resonate with readers of every age.

David Pevsner is an LA-based actor and writer, with a little modeling on the side. His film appearances include Scrooge and Marley (as Ebenezer Scrooge), Spa Night, Joshua Tree 1951: A Portrait of James Dean, Role/Play, and Corpus Christi: Playing with Redemption. His guest starring roles on television include Silicon Valley, NCIS, I’m Dying Up Here, Modern Family, Grey’s Anatomy, Liz and Dick, Law and Order LA, and he starred in the popular web series Old Dogs and New Tricks.

“[An] entertaining debut. . . . These heartfelt meditations on sexual shame in a heteronormative culture will enlighten readers of all identities.” —Publishers Weekly

“In Damn Shame, David Pevsner guides us through a wonderfully appealing chronicle of his life as a performer, writer, sex worker, nude model and a gay guy making his way on his own terms. Rather than oversharing, he’s a delightful host to the most entertaining adventures.” —Paul Rudnick, actor and author of Jeffrey

“In deft, vivid prose, David Pevsner recounts his surprising journey from awkward teen to musical theater phenom to part-time male escort and fearless sexual advocate. Written with sly humour and at times eye-popping candour, Damn Shame is a compelling portrait of one gay man’s struggle for self-acceptance in a country that trumpets liberation but is all too beholden to its Puritan past.” —Doug Wright, Pulitzer Prize-winning author of I Am My Own Wife

“Who could imagine that a book which deals unapologetically with exhibitionism, LGBT ageism and sex work could be so filled with charm and self-deprecating good humour?” —Charles Busch, actor and author of The Tale of the Allergist’s Wife