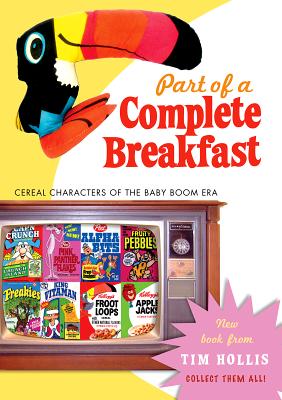 By Tim Hollis
Email or call for price.
Special Order - Call 804-788-1594 or email info@fountainbookstore.com for availability

Butting in every ten minutes to interrupt the exploits of Bugs Bunny, Underdog, or Rocky and Bullwinkle, a very different kind of cartoon series won the affection of viewers on Saturday mornings in the 1950s. Breakfast cereal commercials played out their own storylines in time slots of just a few seconds each. Soon, Cap'n Crunch(TM), the Trix Rabbit(TM), Toucan Sam(TM), Count Chocula(TM), and many more were household names, familiar as the cartoon personalities in regular television programs. Some creatures tried to swipe cereal from their friends. Others showed off the super strength given by their breakfast food of choice. Catch phrases even turned up in everyday talk, from "They're magically delicious "(TM) to "They're grrreat "(TM) Rediscover the heyday of these beloved cereal advertising characters in Part of a Complete Breakfast, which includes fascinating information about their origins. Did you know Tony the Tiger(TM) originally walked on all fours and had claws and sharp teeth? Or that Lucky the Leprechaun(TM) seemed to genuinely hate the kids who chased after him to take his Lucky Charms(TM) cereal? Meet cartoons who never made it into the public eye, including a "lost" Kellogg's character named Nutrina, and a proposed fourth member of the Rice Krispies(TM) gang--a spaceman named Pow This highly illustrated narrative explores the history and evolution of these cartoon characters in an effort to both celebrate and measure their impact on American culture, focusing primarily on the years 1950-1979, when children's programming became a powerful force and savvy advertisers realized that they could directly appeal to an enormous audience of kids through this new medium. In many ways these cereal commercials became extensions of the regularly scheduled programming featuring their own cast of animated characters.Drawing from his personal collection of pop culture memorabilia, Tim Hollis celebrates the characters dreamed up by mid-twentieth-century mad men when television was an exciting new way to advertise. He takes us through the ups and downs of the rules and regulations imposed by the National Association of Broadcasters. Vivid photographs reveal the flavors of the earliest cereal commercials and the role they played in claiming the loyalties of young breakfast eaters. Part of a Complete Breakfast is perfect for members of the baby boom generation who knew and loved many of those beloved cereal mascots, and who still retain a warm place in their hearts (and stomachs) for them.

Tim Hollis is the author of numerous books on popular culture, including Wish You Were Here, See Rock City, Florida's Miracle Strip, Dixie before Disney, and Selling the Sunshine State. He lives in Birmingham, Alabama.