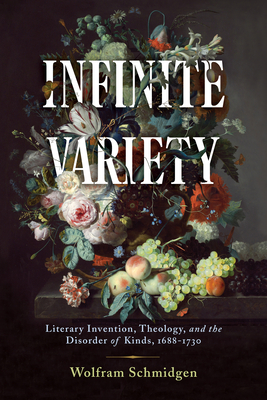 Unnerved by the upheavals of the seventeenth century, English writers including Thomas Hobbes, Richard Blackmore, John Locke, Jonathan Swift, and Daniel Defoe came to accept that disorder, rather than order, was the natural state of things. They were drawn to voluntarism, a theology that emphasized a willful creator and denied that nature embodied truth and beauty. Voluntarism, Wolfram Schmidgen contends, provided both theological framework and aesthetic license. In Infinite Variety, he reconstructs this voluntarist tradition of literary invention.

Once one accepted that creation was willful and order arbitrary, Schmidgen argues, existing hierarchies of kind lost their normative value. Literary invention could be radicalized as a result. Acknowledging that the will drives creation, such writers as Blackmore and Locke inverted the rules of composition and let energy dominate structure, matter create form, and parts be valued over the whole. In literary, religious, and philosophical works, voluntarism authorized the move beyond the natural toward the deformed, the infinite, and the counterfactual. In reclaiming ontology as an explanatory context for literary invention, Infinite Variety offers a brilliantly learned analysis of an aesthetic framed not by the rise of secularism, but by its opposite. It is a book that articulates how religious belief shaped modern literary practices, including novelistic realism, and one that will be of interest to anyone who thinks seriously about the relationship between literature, religion, and philosophy.

Wolfram Schmidgen is Professor of English at Washington University in St. Louis and author of Exquisite Mixture: The Virtues of Impurity in Early Modern England, also available from University of Pennsylvania Press.