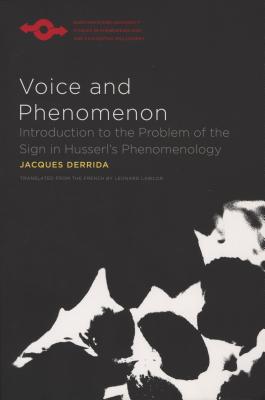 Published in 1967, when Derrida is 37 years old, Voice and Phenomenon appears at the same moment as Of Grammatology and Writing and Difference. All three books announce the new philosophical project called “deconstruction.” Although Derrida will later regret the fate of the term “deconstruction,” he will use it throughout his career to define his own thinking. While Writing and Difference collects essays written over a 10 year period on diverse figures and topics, and Of Grammatology aims its deconstruction at “the age of Rousseau,” Voice and Phenomenon shows deconstruction engaged with the most important philosophical movement of the last hundred years: phenomenology.

Only in relation to phenomenology is it possible to measure the importance of deconstruction. Only in relation to Husserl’s philosophy is it possible to understand the novelty of Derrida’s thinking. Voice and Phenomenon therefore may be the best introduction to Derrida’s thought in general. To adapt Derrida’s comment on Husserl’s Logical Investigations, it contains “the germinal structure” of Derrida’s entire thought. Lawlor’s fresh translation of Voice and Phenomenon brings new life to Derrida’s most seminal work.

JACQUES DERRIDA was a professor of philosophy at the Sorbonne, the Ecole Normale Supérieure, and the University of California, Irvine, and the author of numerous books including Of Grammatology, Dissemination Of Spirit, and Limited Inc. (Northwestern University Press).

LEONARD LAWLOR is Edwin Erle Sparks Professor of Philosophy at Pennsylvania State University. He previously translated Merleau-Ponty’s Husserl at the Limits of Phenomenology and Institution and Passivity for Northwestern.