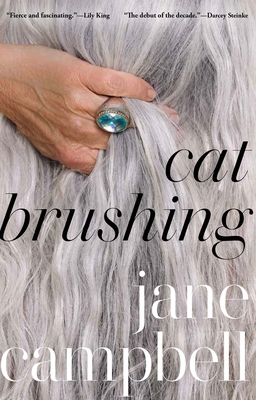 A rousing and original debut story collection that probes the erotic, emotional, and intellectual lives of elder women, CAT BRUSHING will be published in the author's 80th year. CAT BRUSHING, the provocative debut by Jane Campbell, vigorously explores the sensual worlds of thirteen older women, unearthing their passions, libidinal appetites, integrity, and sense of self as they fight against prevalent misconceptions and stereotypes of the aging.Written in spikey, incisive prose, this alluring cast of characters overcomes the notion that elder women's behavior must be in some way monitored and controlled. Susan falls in love with her beautiful young caregiver Miffy, and embarks on an intense emotional relationship within the confines of her nursing home. Linda seeks out her former lover, Malik, despite having left him years ago to return to her settled marriage to Bill. Daisy, who, by a curious stroke of fate, finds herself at the funeral of her former boyfriend, Tim, relives their early life together, his betrayal of her and the anguish of that time. Martha, mourning her small dog whom she believes has been killed by the home care staff, works out how to manage a robot designed to record her behavior, and get her revenge. And the narrator of the title story, "Cat Brushing," communes with her elegant, soft Siamese, reflecting on the sexual pleasures of her past.The timeless wisdom and dark wit of debut writer Jane Campbell inspires and challenges, shocks and comforts as she examines the inner lives of women who fight to lead the rest of their lives on their own terms.

Jane Campbell grew up in Africa and studied English Language and Literature at Oxford. She has worked as a Group Analyst, teaching and training and lecturing internationally, for nearly forty years. Cat Brushing is her first book. She lives in Bermuda and Oxford, England.