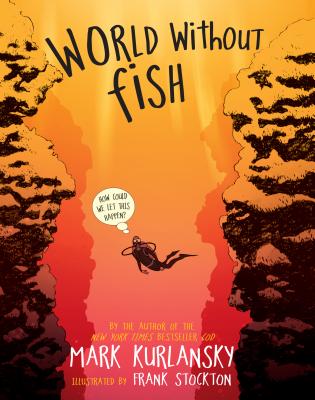 By Mark Kurlansky, Frank Stockton (Illustrator)
Email or call for price.
Out of Print

Mark Kurlansky, beloved award-winning and bestselling author, offers a riveting, uniquely illustrated, narrative nonfiction account for kids about what’s happening to fish, the oceans, and our environment, and what kids can do about it.

World Without Fish has been praised as “urgent” (Publishers Weekly) and “a wonderfully fast-paced and engaging primer on the key questions surrounding fish and the sea” (Paul Greenberg, author of Four Fish). It has also been included in the New York State Expeditionary Learning English Language Arts Curriculum.

Written by a master storyteller, World Without Fish connects all the dots—biology, economics, evolution, politics, climate, history, culture, food, and nutrition—in a way that kids can really understand. It describes how the fish we most commonly eat, including tuna, salmon, cod, and swordfish, could disappear within 50 years, and the domino effect it would have—oceans teeming with jellyfish and turning pinkish orange from algal blooms; seabirds disappearing, then reptiles, then mammals. It describes the back-and-forth dynamic of fishermen and scientists. It covers the effects of industrialized fishing, and how bottom-dragging nets are turning the ocean floor into a desert.

The answer? Support sustainable fishing. World Without Fish tells kids exactly what they can do: Find out where those fish sticks come from. Tell your parents what’s good to buy, and what’s not. Ask the waiter if the fish on the menu is line-caught And follow simple rules: Use less plastic, and never eat endangered fish like bluefin tuna.

Interwoven with the book is a graphic novel. Each beautifully illustrated chapter opener links to form a larger fictional story that complements the text. Hand in hand, they create a Silent Spring for a new generation.

Mark Kurlansky is a former commercial fisherman and New York Times bestselling author of Cod, Salt, The Big Oyster, and other books. He’s won numerous awards, including the James A. Beard Award, ALA Notable Book Award, and New York Public Library Best Books of the Year Award. He lives with his wife and daughter in New York City and Gloucester, Massachusetts. His website is www.markkurlansky.com.

Frank Stockton is an artist and illustrator whose work has appeared in Esquire, The New Yorker, The New York Times, and Rolling Stone. He lives in Brooklyn, New York.

“In his histories of cod and oysters, Mark Kurlansky described how those species once thrived in the wild, and how they were depleted. [World Without Fish] casts an even wider net and, with the help of superb illustrations and an interwoven graphic novel by Frank Stockton, creates a compelling narrative for young people.”
—The New York Times

"A wonderfully fast-paced and engaging primer on the key questions surrounding fish and the sea. Great for a classroom or as a beach read"
—Paul Greenberg, author of Four Fish

"Mark Kurlanksy exposes one of the most alarming but least-known catastrophes of our time: The depletion of our oceans. While raising the alarm, Mark has also given us the keys to solving the crisis, specific things that each of us can do to help restore our ocean planet."
—Michael Sutton, Vice President, Monterey Bay Aquarium