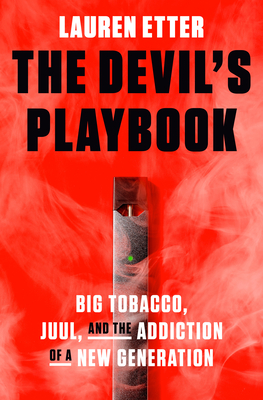 “Juul’s rise and fall teaches us something about greed, capitalism, policy failure and a particular cycle in American business that seems destined to repeat itself. . . . Deeply reported and illuminating.”—The New York Times Book Review (Editors’ Choice)

Big Tobacco meets Silicon Valley in this gripping exposé of what happened when two of the most notorious industries collided—and the vaping epidemic was born.

Howard Willard lusted after Juul. As the CEO of the parent company of tobacco giant Philip Morris, he believed the e-cigarette had all the addictive upside of the original without the same apparent health risks and bad press. Meanwhile, Adam Bowen and James Monsees began working on a device meant to destroy Big Tobacco but ended up baking the cigarette industry’s DNA into their invention. Juul’s e-cigarette was so effective that it put the company on a collision course with Philip Morris, sparking one of the most explosive public health crises in recent memory.

Award–winning journalist Lauren Etter tells a riveting story of greed and deception in one of the biggest botched deals in business history. Willard was desperate to acquire Juul, even as his team sounded alarms about the startup’s reliance on underage customers. Ultimately, Juul’s executives negotiated a deal that let them pocket the lion’s share of Philip Morris’s $12.8 billion investment while government regulators and furious parents mounted a campaign to hold the company’s feet to the fire.

The Devil’s Playbook is the inside story of how Juul’s embodiment of Silicon Valley’s “move fast and break things” ethos wrought havoc on American health, how a beleaguered tobacco company was seduced by the promise of a new generation of addicted customers, and how Juul’s founders, board members, and employees walked away with a windfall.

Lauren Etter is an award-winning investigative reporter at Bloomberg News, where she writes in-depth corporate features and investigative stories for Bloomberg Businessweek. Previously she was a staff reporter at The Wall Street Journal, and she has written for Vanity Fair and The New Yorker. She holds master’s degrees in journalism and in law from Northwestern University. Etter lives in Los Angeles with her husband and three children.

“Deeply reported and illuminating. [The] rich narrative . . . of Juul’s rise and fall teaches us something about greed, capitalism, policy failure and a particular cycle in American business that seems destined to repeat itself.”—New York Times Book Review

“The deeply reported, wonderfully written story of how Juul fell from grace, taking its tobacco-giant investor, Altria, with it. Encompassing raging ambition, desperation, brutal politics, and the perils of Silicon Valley’s gospel of disruption, The Devil’s Playbook is a must-read.”—Bethany McLean, New York Times bestselling co-author of All the Devils are Here and The Smartest Guys in the Room

“Dropping readers directly into the smoke-filled back rooms of the tobacco industry and the sleek offices of Silicon Valley, Lauren Etter delivers gritty reporting and graceful storytelling to reveal how their doomed collision hooked the next generation on Juul. The Devil’s Playbook is as addictive as its subject.”—Jonathan Allen, bestselling co-author of Shattered and Lucky

“The Devil’s Playbook is the best business book I’ve read since Bad Blood. It’s an almost unbelievable story of corporate intrigue and personal drama, with high stakes not just for an industry but for world health. . . . A riveting story, meticulously researched and almost impossible to put down.”—Jonathan Eig, New York Times bestselling author of Ali: A Life

“A fascinating, inside-the-room exploration of Philip Morris’s disastrous attempt to move away from its controversial core business only to crash at full speed into Juul, the mascot of what would become the vaping epidemic . . . Meticulously reported and a thrilling read.”—Bradley Hope, New York Times bestselling co-author of Billion Dollar Whale

“A decade ago we were winning the war against teen nicotine addiction. Today we are back in the trenches. What happened? Lauren Etter, a rare master of both deep reporting and dramatic narrative, tells a tale that needs to be told. It’s a tragic collision of Big Tobacco and Silicon Valley, with the health of the world hanging in the balance.”—Alan Murray, CEO, Fortune Media

“In this comprehensive scrutiny of the vaping craze and the business behind it . . . Etter illuminates the crucial missteps that can occur when greed and poor leadership obscure the vision of an enterprising product. Armed with an immense body of research and insider interview material, the author digs deep into the controversial industry to reveal the avarice, scandal, corporate egotism, and rampant ‘political knife fights.’ . . . Riveting journalism that probes the triple threat of vaping, nicotine addiction, and corporate greed.”—Kirkus Reviews (starred review)

“Compulsively readable . . . Writing with an objective clarity and dishing like an insider-hipster, Etter offers a powerful indictment of both sides of the same corrupt coin, delivering an eye-opening account of an industry shamelessly gaslighting customers, employees, investors, and government regulators in pursuit of profits over principles.”—Booklist (starred review)