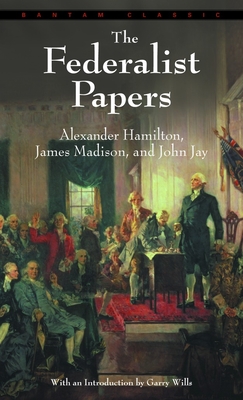 Originally published anonymously, The Federalist Papers first appeared in 1787 as a series of letters to New York newspapers exhorting voters to ratify the proposed Constitution of the United States. Still hotly debated, and open to often controversial interpretations, the arguments first presented here by three of America’s greatest patriots and political theorists were created during a critical moment in our nation’s history, providing readers with a running ideological commentary on the crucial issues facing democracy.

Today The Federalist Papers are as important and vital a rallying cry for freedom as ever.

This edition features the original eighteenth-century text, with James Madison’s fascinating marginal notations, as well as a complete text of the Constitution.

Alexander Hamilton was born in the West Indies in 1757, the illegitimate child of a Scottish merchant. He came to the American colonies to study at King’s College (now Columbia University), and became an early and ardent supporter of the Revolutionary cause. During the Revolutionary War he was aide-de-camp to George Washington and a member of the Continental Congress. He was a leading figure at the Constitutional Convention (1787) and a principal author of The Federalist Papers. At first Secretary of the Treasury he articulated a policy of protection for manufacturing interests, strong central government, and establishment of a national bank. After leaving the Cabinet, he practiced law in New York. His personal attacks hindered the political career of the volatile Aaron Burr, who finally challenged him to a duel in 1804. Hamilton was shot, and died of his wounds.

John Jay (1747-1829) was a conservative lawyer who became a leading patriot. He was a minister to Spain (1780-82), the first Chief Justice of the U.S. Supreme Court (1789-95), and he negotiated the treaty of 1795 between the U.S. and Britain. His contributions to The Federalist Papers concern foreign affairs.

James Madison was born in 1751, the son of a Virginia planter. He worked for the Revolutionary cause as a member of the Continental Congress and the Virginia House of Delegates. The leader of deliberations at the Constitutional Convention, he fought for the adoption of the Constitution and the Bill of Rights. Through an ally of Hamilton on the Constitution he was a supporter of Jefferson’s agrarian policies. He was Jefferson’s Secretary of State (1801-9) and his successor as president (1809-17), but his presidency was marred by the unpopular War of 1812. Madison died in 1836