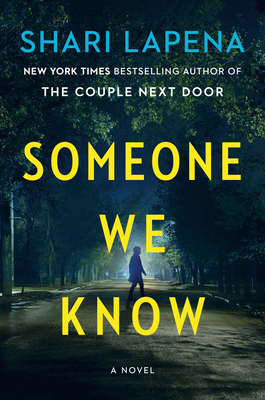 I would read Shari Lapena's grocery list, y'all. She's so skilled at the twisty mystery and this new book is as good as her others. When suburban mom Olivia finds out that her teenage son has been breaking in to the homes of their neighbors, she is terrified that he'll be in serious legal trouble despite his assurances that he never steals, only snoops. When a pretty young wife - who happens to live in one of the houses he broke into - turns up dead, no one is free of suspicion. As we dive deeper into the private lives of the neighbors, we learn that everyone is hiding something, and anyone could have done it.

"No-one does suburban paranoia like Shari Lapena--this slowly unfurling nightmare will have you biting your nails until the end."
--Ruth Ware, #1 New York Times bestselling author of The Woman in Cabin 10

The new domestic suspense novel from the New York Times bestselling author of The Couple Next Door, A Stranger in the House, and An Unwanted Guest, Shari Lapena

Maybe you don't know your neighbors as well as you thought you did . . .

"This is a very difficult letter to write. I hope you will not hate us too much. . . My son broke into your home recently while you were out."

In a quiet, leafy suburb in upstate New York, a teenager has been sneaking into houses--and into the owners' computers as well--learning their secrets, and maybe sharing some of them, too.

Who is he, and what might he have uncovered? After two anonymous letters are received, whispers start to circulate, and suspicion mounts. And when a woman down the street is found murdered, the tension reaches the breaking point. Who killed her? Who knows more than they're telling? And how far will all these very nice people go to protect their own secrets?

In this neighborhood, it's not just the husbands and wives who play games. Here, everyone in the family has something to hide . . .

You never really know what people are capable of.

Shari Lapena is the internationally bestselling author of the thrillers The Couple Next Door, A Stranger in the House, An Unwanted Guest, and Someone We Know, which have all been New York Times and UK Sunday Times bestsellers. Her books have been sold in thirty-five territories around the world. She lives in Toronto.

Praise for Someone We Know:

“No-one does suburban paranoia like Shari Lapena—this slowly unfurling nightmare will have you biting your nails until the end.”
—Ruth Ware, #1 New York Times bestselling author of The Woman in Cabin 10

“Slyly plotted . . . Lapena skillfully maximizes suspense with her dual story lines that eventually collide, as well as some deft misdirection . . . many fans of domestic suspense will be satisfied.”
—Publishers Weekly

“Highly suspenseful . . . Sure to delight fans of Liane Moriarty and Louise Candlish.”
—Booklist

“This book is non-stop twists and turns. Shari Lapena will leave your head spinning as you try and make sense of the lies surrounding the families in this neighborhood. And just when you think you’ve figured it out, you’re probably wrong. Absolutely recommend!”
—Suspense Magazine

“Someone We Know is a tour de force of thriller writing. Shari Lapena proves yet again that she is the mistress of the pacy plot, cliff edge tension and menacing suburban claustrophobia. Fans will be delighted and if you haven’t read her books yet, then why on earth not?”
—Gilly Macmillan, New York Times bestselling author of The Nanny

Praise for An Unwanted Guest:

“Proving that time periods may change but people do not, Lapena delivers a solid whodunit with an ending that would make Dame Christie proud.”
—USA Today

“Another nail-biter perfect for an all-nighter.”
—Entertainment Weekly

“A new thriller that will give you serious Agatha Christie vibes . . . if you’re one of the many people who counts [And Then There Were None] among their favorite books, you will love An Unwanted Guest. . . . A deftly crafted and expertly paced thriller that will keep readers guessing (and terrified) until the very end.”
—Bustle

“This compelling and realistic modern take on the country-house mystery will gain new fans for the author and is definitely one to hand to devotees of Agatha Christie (and her modern interpreter, Sophie Hannah).”
—Booklist

“An intriguing cast, an isolated location, a raging storm and the threat of death in every dark corner: An Unwanted Guest reads like Agatha Christie with a shot of adrenalin. Clear your desk before you start it because you won’t want to put it down.”
—Gilly Macmillan, New York Times bestselling author of I Know You Know

“Lapena has written a great whodunit, with a delicious Christie-like vibe. Fans of the author's first novel will want this, and anyone who savors a well-crafted murder mystery will gobble it up!”
—Library Journal (starred review)

Praise for A Stranger in the House:

“Lapena’s A Stranger in the House will have you sleeping with the lights on for weeks.”
—Bustle

“So much suspense. So many twists. Good luck sleeping tonight.”
—HelloGiggles

“Smart, twisty and compulsive. Suspense and suspicion accumulate relentlessly, toying with your expectations and your emotions right up until the packs-a-punch ending. Don’t miss it, and don’t expect to be able to put it down.”
—Gilly Macmillan, New York Times bestselling author of I Know You Know

"Great suspense and lots of twists."
—The Toronto Star

"Lapena keeps the well-developed twists churning, with each a surprise notch in this ever-evolving plot, and she continues this skillful storytelling until the stunning twist at the end . . . memorable."
—Associated Press

Praise for The Couple Next Door:

“Meticulously crafted and razor sharp. The Couple Next Door lingers long after you turn the final page.”
—Harlan Coben, #1 New York Times bestselling author of Fool Me Once

“The twists come as fast [as] you can turn the pages.”
—People

“Provocative and shocking. One crime, an entire neighborhood of suspects, secrets, and lies. How well do we ever know those around us? The Couple Next Door will keep you glued to the pages in search of the answer. Even then, you’ll never guess the truth . . . until it's too late.”
—Lisa Gardner, #1 New York Times bestselling author of Find Her

“I read this novel at one sitting, absolutely riveted by the story line. The suspense was beautifully rendered and unrelenting!”
—Sue Grafton, New York Times bestselling author of X

“A twisty, utterly riveting tale that will send readers on a wild roller-coaster ride of emotions. Shocking revelations kept me turning the pages like a madwoman.”
—Tess Gerritsen, New York Times bestselling author of Playing with Fire

“Expertly paced and finely crafted, The Couple Next Door is a gripping thriller of the highest order. I couldn’t put it down.”
—A. J. Banner, bestselling author of The Good Neighbor

“Gripped me from the very beginning to the very end!”
—Becky Masterman, author of Rage Against the Dying

“Brilliant! This utterly riveting psychological thriller hurtles along at breakneck speed, never giving you the opportunity to catch your breath. Twisty, turny, and unputdownable.”
—C. L. Taylor, bestselling author of The Lie

“Where did that baby go! It’s hard not to read to the end to find out, and the twists waiting there are gratifyingly clever.”
—USA Today

“The many never-saw-them-coming twists and questionable characters . . . will keep you on the edge of your seat. First-time novelist Lapena’s writing is spare and tense, and it makes The Couple Next Door a compulsive read. The last line is absolutely a killer.”
—Good Housekeeping